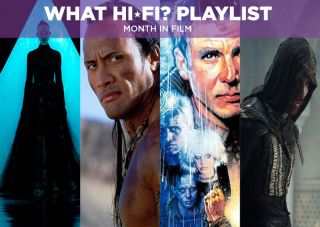 The What Hi-Fi? team devours plenty of films when it comes to testing the latest in home cinema, and we're always keen on finding new films or using old favourites that we know inside out.

So whether it's the latest Hollywood film, a title on a streaming service or perhaps a demo disc that pushes your home cinema to the max, we've got you covered…

As a solid blend of science-fiction, spirituality, and teenage rebellion, Donnie Darko is almost compulsory viewing for any modern-day teenager.

So it’s only fitting, as the film hits its 15th anniversary, that it is reintroduced to the cinema in 4K.

For those who have missed out on this time-travelling tale, Donnie Darko follows the titular teen (Jake Gyllenhaal) as he deals with his imaginary friend Frank - a horrifying 6ft tall rabbit - who tells Donnie that the world is going to end in 28 days, 6 hours, 42 minutes and 12 seconds.

In that time, he has to try to save his family, the universe and, if possible, himself. In terms of visuals, Donnie Darko has a fair amount to show off during its Ultra HD release – the supernatural portals and invisible barriers are sure to look much better with four times the number of pixels dedicated to them.

It’s a film that, like many teens themselves, isn’t afraid of being complex, misunderstood or, sometimes, teaching you a surprisingly large amount about Smurfs. It’s weird, sure, but in this film that’s a compliment.

If you get the chance to watch it fresh in 4K, take it.

Like the apostrophe, Nicolas Winding Refn's Neon Demon is very much a twofer. It's a stellar movie to test both your home cinema system’s sound and picture, thanks to Cliff Martinez’s thronging psychedelic score and, classic Winding Refn, its triumph as an irrefutable visual masterclass.

The dark sexy vampiric chiller, which sees a doe-eyed Elle Fanning submerge herself in Los Angeles’ catty modelling scene, may be yet another exercise in style over substance for the director – and one inauspiciously closer to the balance of Only God Forgives than Drive – but as a titanic audiovisual assault it’s a solid disc to put any system through its paces.

While surging synths and pulsating beats pump through the front speaker channels, the compelling aesthetics – the contrast of graphic modeling against white canvases during photoshoots, and the deep-rooted symbolic presence of explosive reds and cold blues – also vie for an equal stake of your attention.

Not all narcissism and narcotics, it’s not short of catfights for challenging your TV or projector’s handling of action too. And, as the girls bathe in blood and one coughs up an eyeball, it also proves a good test of your stomach strength.

Perhaps then, it’s actually a threefer.

Buy The Neon Demon on Blu-ray at Amazon

As someone who grew up on and loves sci-fi films, I have no idea why it's taken me this long to watch Blade Runner.

Visually, it's one of the prettiest things I've ever seen. This neon-soaked world, with its flying cars, mishmash of cultures, cyberpunk fashion and endless imposing skyscrapers, is the blueprint for all sci-fi films that came after it. From Battlestar Galactica to Firefly to The Matrix to The Fifth Element - there are countless elements that can be traced back to Ridley Scott's 1982 masterpiece. Even after all these years, the cityscape is jaw-droppingly beautiful.

This neo-noir, grungy, dystopian world takes place in Los Angeles 2019, where near-human androids ('replicants') are outlawed, and Blade Runners are the policemen tasked with executing them.

Harrison Ford's Deckard is every bit the jaded, hard-boiled detective falling for Sean Young's femme fatale Rachael, a replicant who believes she's human. Their love story is the only unconvincing aspect of the film (can we learn more about the enigmatic Rachael, please?), but it's the characters around them - human and replicant - who prove more interesting.

Replicant Roy Batty (played brilliantly by Rutger Hauer), whose iconic 'tears in rain' monologue incites the most empathy, upends the villain-hero archetype in the final 'fight' with Deckard. It's a surprising turn of events, and one that forces you to ponder what it means to be human.

The slow pacing, the minimal dialogue, the philosophical element - they're all so removed from the action-packed films of the 90s and today. Coupled with Vangelis's haunting electronic soundtrack and the dark, imposing atmosphere of Scott's vision, the film is more dreamlike and contemplative. I'm not sure I fully loved it, but I know it will stay with me for years to come.

Buy Blade Runner: The Final Cut on Blu-ray at Amazon

It’s a little too easy to pick holes in the second instalment of the Mummy series.

Some terrible acting (especially an early turn from Dwayne ‘The Rock’ Johnson), an uneven script and some of the worst CGI in existence are easily spotted.

Yet, every time it comes on TV, and it seems to be on rather a lot, I find myself watching it again. The leads – Brandon Fraser and Rachel Weisz, playing O’Connell and Evelyn respectively – are nothing short of charming and I just can’t help rooting for them.

Even the presence of their relentlessly cute son Alex (played by Freddie Boath) fails to take the shine off things. The action storms along with an enthusiasm that’s rarely seen, yet there’s enough variation of pace to keep things interesting.

Despite the variable quality CGI (the fight scene with the Scorpion King is rendered awfully) we’ve a soft spot for those cannibal pigmies - think homicidal Ewoks and you’re not far wrong.

Shaun Parkes and John Hannah provide plenty of comic relief, while many of the set-piece fight scenes still work well. The thing I like most about it? However many times I see it, it’s always fun.

Buy The Mummy Returns on Blu-ray at Amazon

Video games have had a pretty bad time of things when it comes to Hollywood.

If you were to make a list of the best video adaptations, we imagine the piece of paper would remain blank.

Resident Evil has disappointed with each sequel; no one remembers the two Angelina Jolie-starring Tomb Raiders or Prince of Persia, and Warcraft failed despite the talent involved. And the less said about Super Mario Bros. the better.

So what makes Assassin’s Creed any different? Well, it’s the hope that kills, of course, and Creed provides plenty of hope in the form of its cast – a formidable collection of award-winning talent that includes Michael Fassbender, Marion Cotillard, Brendan Gleeson and Jeremy Irons.

Then there’s Justin Kurtzel, director of 2015’s impressively imagined Macbeth. Though this is his first big film, we’ve got the reliable hands of producer Frank Marshall (Indiana Jones, Back to the Future, The Bourne series) to keep it on the tracks.

Can Assassin’s Creed buck the trend? We'll have to wait and see…

MORE: The 26 best 4K TV shows, films and sport to watch this Christmas