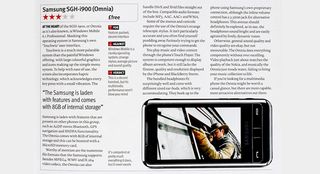 The Korean tech giant has been at the top of the smartphone tree for years, with recent models such the Galaxy Note 4 and S6 Edge showcasing their mighty talents and gaining five-star reviews in the process.

Plenty of features, but lacking quality

That hasn’t always been the case, as is made clear by our January 2009 review of one of Samsung’s earliest efforts. The SGH-i900, known as the Omnia to its friends, showed clear signs of where the brand was heading, but it certainly didn’t have the all-round talent to worry the iPhone of the day.

It was packed with features including a telescopic stylus, the then still ooh-worthy haptic feedback and a microSD card slot. As continues to be Samsung’s way, file compatibility was excellent.

The phone’s primitive Windows Mobile OS made the inclusion of WMV and WMA files obvious, but we were happy to see AAC alongside MP3 on the audio side of things.

Performance wasn’t great though, with the i900 failing to deliver video and audio with any great skill. We also weren’t taken with the Windows OS, finding it clunky to use – though the early iteration of Samsung’s Touchwiz interface came in for some praise.

Fast forward to today’s Galaxy S6 and it’s clear Samsung has learned much over the years. The latest phone has plenty of ability to match its comprehensive specifications.

Video performance is about as good as it gets and audio - once a real weakness of Samsung’s handsets - has improved enough to give rivals such as the iPhone 6 and the LG G4 a few sleepless nights. Not a bad showing for a handset founded from such humble beginnings...