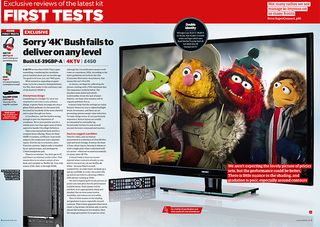 We don’t often dish out one-star reviews. It’s a rare ‘accolade’ that only a handful of products have achieved. Bush’s LE-39GBP-A (reviewed in September 2014) is one of them.

That was a big problem at a time when there wasn’t a commercially available source capable of delivering such a signal. Admittedly, you now have the Panasonic DMP-UB900 and Samsung UBD-K8500 4K Blu-ray players to choose from, but this wouldn't have helped the Bush's cause.

Things got even worse when you consider all three HDMI inputs on the Bush are of the old, 1.4 spec. Yes, they will carry a 4K signal, just as long as it doesn’t have a frame rate of more than 30fps.

Normally we use Netflix or Amazon streaming to get our 4K fix. In this case that idea is scuppered, because the Bush doesn’t even have an internet connection, let alone any streaming apps. Add poor Full HD picture quality and awful standard definition replay into the mix and a one-star rating is the natural conclusion.

Check our recent reviews of 4K TVs and you’ll come across the Hisense 55K321. This £600 55in set also has a 4K panel, but it comes fully loaded with all the inputs and Smart services necessary to make full use of the resolution. It’s pretty decent with lower-resolution content too.

While the three-star rating shows there’s still a way to go for this affordable UHD set, it remains light years ahead of that awful Bush offering. That’s huge progress for affordable 4K in such a short time.

How long before we have something truly recommendable for around £500? By the looks of it, not long at all.