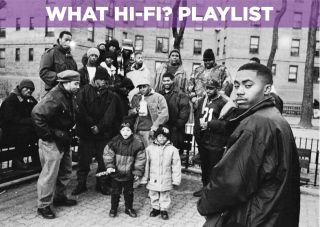 Twenty years after its release, Nas (or to call him by his slightly longer name, Nasir bin Olu Dara Jones') Illmatic is considered to be one of the most influential hip hop albums of all time - bringing a sense of truth and rawness to the genre.

With its jazz samples, hard beats and lyrics that offered a look at what New York life was like in the 1980s and 90s, Illmatic was a sharp left-turn away from the hip-hop trends of the time, dropping the macho posturing associated with the genre for a more reflective take on life as a young black man in Queens, NY.

Time is Illmatic looks at not the making of the album and Nas' life leading up to its creation. Charting his time in the Queensbridge Houses, the largest public housing development in North America, his dropping out of school in eighth grade to his eventual rise to the hip hop artist of the moment. If you haven't listened to - or heard of Nas - then Time is Illmatic encompasses his early career, influences and family life in what is a revealing film.

Filmmaker One9 interviews his father (legendary jazz player Olu Dara, who hails from Mississippi) and maps the jazz influences evident in Nas' work. His early childhood takes up the film's first half, concentrating on his upbringing where he effectively taught himself, dropping out of school and reading given to him by his father, as well as the Bible and the Quran.

It creates an unexpectedly complex portrait of an artist; a self-taught man who learnt how to live life though the somewhat clichéd manner of 'living it on the streets'. Seen from that perspective, Illmatic is presented as a far more personal album than most other hip-hop LPs at the time.

His family and friends provide most of the insight on Time is Illmatic, while Nas himself speaks in turn about his family, including the loss of his mother at an early age, and the death of several friends as a result of gang crime. One vivid description serves as a reminder of his early life spent in one of the toughest neighbourhoods in America.

Despite plenty of revealing moments within the 74-minute film, the documentary doesn't feature as much on the creation of Illmatic as we might have liked. Concentrating on the first three tracks on the album: N.Y. State of Mind, Life's a Bitch and The World is Yours (if you exclude the intro The Genesis), it only really scrapes the beginning of the album.

And so while the look into the production of those tracks is detailed and insightful – from where the beats were sampled, to who came up with what parts of the track – we really wish there was more of it. Not to mention more live performances of the songs themselves, which are only shown in snippets.

Nonetheless, the songs chosen are a good showcase for the lyricism and music style with which Nas made his name. The length of the documentary means that perhaps a detailed track-by-track breakdown isn't feasible, but focusing on three songs still feels a little brief.

Similarly, some of the potentially interesting talking heads are given very little time. Kendrick Lamar, one of the biggest names in hip-hop in 2014, has one solitary sentence that is the definition of 'phoned in' (you don't even see him), while Alicia Keys and Busta Rhymes touch ever so briefly on the importance of Illmatic to them, but are then never seen again, which feels like a wasted opportunity.

Nas: Time is Illmatic certainly leaves us wanting more. It successfully shows Nas as a genuinely interesting character outside of his music career - we just wish this documentary had gone a little further to revealing that.

Nonetheless, whether you're a casual or hardcore fan, or someone coming afresh to this elder statesman of hip hop, Time is Illmatic is an involving, if succinct, look at the artist's first steps.