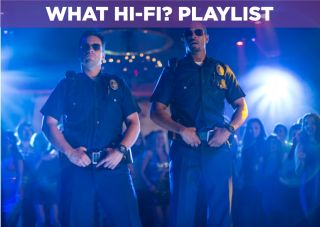 If you watched the trailer for Let’s Be Cops (scroll down to do just that) wherein two thirty-year-old guys called Ryan (Jake Johnson) and Justin (Damon Wayans Jr.) fake being LAPD cops, and thought the film aimed for cheap and easy laughs and not much else, you’d be on the money.

However, while it’s predictable and features a generic, by the numbers plot, it delivers the laughs (and groans) that prop up its well-used concept.

The set-up can be boiled down to this; Ryan and Justin dress up as police officers and get more than they bargained for when they attract the attention of the Russian mob.

Borrow some of the gross out humour from Borat, splice it with the plot of 21 Jump Street, add in the friendship from Superbad and you get something like Let’s Be Cops.

But, Let’s Be Cops manages to be more than just the sum of its parts, taking the chemistry of its two leads (both of whom work on US TV hit New Girl) and ensuring that while the jokes may not be of the highest quality, the film keeps them coming thick and fast and they are on target more often than they miss.

Johnson's Ryan survives on his one job in Los Angeles (an acting role in a herpes ad) – a nobody who used to be a somebody who hasn’t achieved much in life.

Then there’s Justin, a budding videogame designer constantly over-looked by his superiors and lacking the courage to stand up for himself.

Things change when they go out one night dressed up as cops and find that people treat them differently. They abuse their newfound power, setting the plot in motion as all manner of complications ensue.

There’s Josie, the girl Justin likes (Nina Dobrev), who’s involved with the Russian mob, who want to use her family’s café to traffic guns and money through an underground tunnel.

Then there’s Rob Riggle’s police officer who falls for their act and the leader of a Russian gang called 'Mossi' (played by an unrecognizable James D’Arcy) – a vicious, vindictive man who takes no prisoners.

It’s the chemistry between the two leads that keeps the film afloat. Johnson’s Ryan could easily have become an irritating presence. However, he sells the idea of a man so desperate to be something that he loses perspective, and while it’s scarcely believable that anyone would do what he does, the film is, after all, a ridiculous comedy.

Wayan’s Justin is the introvert, saddled with the baggage of having to frequently say ‘no’ and ‘this is a bad idea’.

The role calls for Wayans to play it straight and he does so commendably - stemming the madcap antics of Johnson’s character with a casual cool - and when he’s given the chance to go wacky himself, he duly obliges.

Andy Garcia pops up as a police detective but the role doesn’t ask for much, and the best we see from him is his trademark menacing delivery and a fine salt-and-pepper beard.

The supporting cast is fun as well, even if they’re asked to perform broad stereotypes, with Riggle dialing it down, while Keegan Michael-Key and Natasha Leggero head in the other direction, bringing a lot of energy to their roles.

And we should mention James D’Arcy, hiding behind an American accent and prison tats. He's a surprisingly intimidating presence that gives the film a real sense of danger whenever he’s on screen.

So while Let’s Be Cops isn’t original, it is enjoyable. It aims for the cheap laughs and delivers - and there’s nothing wrong with that.