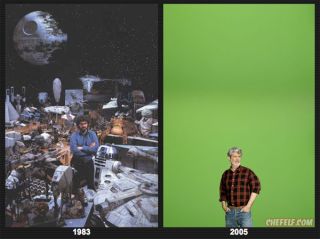 Halloween is here, and ghouls and ghosts will roam the streets. But for some, there’s nothing more disturbing than George Lucas and his deal to sell Lucasfilm to Disney.

No doubt there has been a disturbance in the Force. But perhaps Star Wars fans should put aside that instinctive outrage and really think about it, because it’s not such a bad thing.

First things first: I think that scepticism is perfectly justified. The original Star Wars trilogy is sacred to me, whereas the prequels were nothing short of blasphemous.

My respect for George Lucas was replaced with a bitter loathing. He took something special from my childhood and drove it into the ground, bulldozing over it with CGI and repeated post-post-production changes.

And now he’s getting $4.05 billion to pass the reins to the people behind Mickey Mouse and Space Mountain.

But what do we have to fear, really? Money, merchandise and Happy Meals. After the likes of Jar-Jar Binks and The Clone Wars, that’s not such a scary proposition.

Maybe there will be a Star Wars Land theme park, with rollercoasters in the shape of X-Wings and TIE fighters. Is that so bad?

Disney’s ownership of Lucasfilm may actually be good for Star Wars. Let’s face it: Lucas turned to the dark side long ago. The franchise doesn’t have much dignity left to lose anyway – so the only way is up.

For starters, the sale of Lucasfilm includes ILM and Skywalker Sound, so when it comes to sound and vision it’s business as usual. And Disney has a good habit of restoring and rereleasing its treasures, so fans may finally get the original versions of Star Wars in high definition.

Of course, the idea of a seventh, eighth and ninth film reeks of cynical money grabbing. That said, judging by Disney’s work with Pixar and Marvel, Star Wars is in much safer hands now.

This is a company that knows how to make good films, and how to handle franchises with the proper respect. Tron: Legacy, for example, was a spectacular and faithful follow-up to the 1982 original. If Star Wars needs to be revitalised, the Mouse House has the power and sensitivity to pull it off.

Industry veteran Gary Coulter, who has worked on James Bond, Batman and Harry Potter, told What Hi-Fi? Sound and Vision that he feels optimistic. “Disney is a good company. I am confident that they will get a good director – think of a new Star Wars directed by JJ Abrams.

“Look at the Marvel stuff, which they also own. The new films could be at the level of Iron Man or The Avengers. We may also see something Star Wars-based coming from Pixar in the future.”

When I first heard about the Lucasfilm sale, I had a very bad feeling about it. My thoughts turned to a number of possible abominations such as Disney Princess Leia, or Snow White and the Seven Ewoks.

But that’s not going to happen. Disney is not stupid enough to waste $4.05 billion. Difficult to see, the future is, but it can’t be worse than The Phantom Menace.