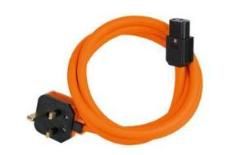 This provides worthwhile gains in performance – and plenty of them

‘Big Orange' turns out not to be Dale Winton after all. It's an Ecosse mains cable so virulently orange that it looks like it might have been nicked from a Flymo.

In that respect it's not dissimilar to the original Big Orange mains lead we awarded four stars to more than half a decade ago.

In the intervening time, Ecosse has fiddled with many aspects of the content and construction of the cable – the number and arrangement of conductors, the insulation, the mains plug at one end and the three-pin connection at the other.

The result is this Mk2+. The benefits over a standard, free-in-the-box mains cable are abundant.

Benefits with video and audio
Gains are of a similar order when the Big Orange Mk2+ is introduced to audio equipment.

General clarity and midrange bite are improved, while low frequencies dig a little deeper and hit a little more solidly.

There's a hint of hardness to high-volume high frequencies – just a suggestion that the Ecosse won't suit more strident-sounding equipment – but this caveat doesn't spoil the overall performance.

So, while the Mk2+ isn't cheap, it's an upgrade more cost-effective than most.