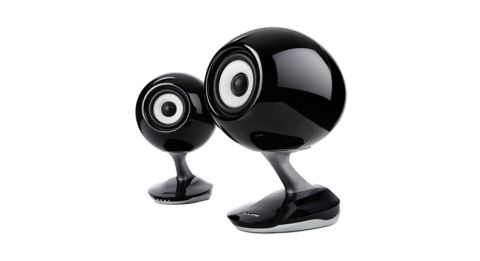 Serves up some great stereo imaging for the money, but we’d like more refinement

At £1000 a pair, the Eclipse TD-M1s sit at the top end of the desktop speaker scale - but we can’t think of many as elegant.

The design is typical Eclipse – an oval enclosure and a single driver (in this case 8cm) doing all the hard work, generating bass, midrange and treble.

It’s based on the driver used in the company’s excellent 508Mk3s, but this version has a millimetre of extra travel, despite the smaller cabinet.

In hand, the TD-M1s ooze quality and feel suitably weighty and robust. Each one is attached to an alloy stand which offers up to 20-degrees of adjustment.

Pull down a lever on the underside of each speaker, select your angle and pull the lever back up to lock in place.

Altering the angle isn’t quite the painless experience it should be – it all feels a bit vague and you’re never quite sure whether the speakers are in the correct position to lock them in. Such a basic thing shouldn’t prove so frustrating.

Instead of a remote control, Eclipse offers its own Eclipse TD Remote app. It’s basic: pressing the relevant icon changes input, while a slider mimics that on the main speaker and changes volume.

It’s useful if you’re sat at a distance, but it’s much easier to just reach over and use the touch-sensitive controls. Tap the settings icon and you can dim the bright LEDs.

You also have the option of enabling or disabling the system’s digital filter. We find, with it turned on, the speakers sound a tad fuller but at the expense of clarity and timing.

With it off, music sounds purer. It’s frustrating that the handset goes to sleep. There’s a delay while the app wakes up and reconnects to the speakers.

There’s also no built-in DLNA functionality through the app – you must go for a third-party option to play music stored on a NAS device.

If you’re downsizing to the Eclipses from a larger bookshelf speaker, they can take a little time to get used to.

Why? Well, the laws of physics dictate that you can’t get the same level of bass and extension from the TD-M1s that you can from speakers with larger cabinets and drive units – but that’s not to say the Eclipses lack some low-end grunt.

The deep bass notes of Massive Attack’s Angel catch out many speakers, and although the reach isn’t quite there, the detail, texture and definition definitely is. There’s also a real sense of drama.

But where the TD-M1s really make their mark is when it comes to focus and stereo imaging. The Eclipses are simply stunning in this regard.

You need to get their positioning right (on the desk in our test rooms, we found they work best at 20-degrees, slightly toed in and firing just across the front of your face), but when you do, the speakers paint an intimate portrait.

Play Sam Smith’s Stay With Me and there’s solidity to each drum hit and there’s loads of detail. Play Duke Dumont’s I Got You over AirPlay and this upbeat dance track communicates the TD-M1’s great sense of timing.

Every element sits cohesively in a fabulous soundstage, but you do notice a slight brightness in the treble.

Part of this is down to the medium (AirPlay sounds a tad coarse compared to a wired-USB connection), but the speakers do have a slight lack of refinement, which can make them tiring the longer you listen.

The TD-M1s display talent, but a lack of finesse combined with a couple of niggles and a relatively high price takes a star off.