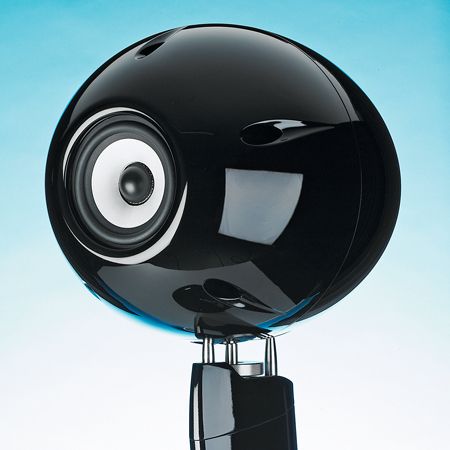 If you value timing, detail and imaging above all else, these are for you

Few speaker ranges are as obsessively focussed as Eclipse’s. The company’s products – including these, the Eclipse TD510ZMk2 speakers – are built upon a single aim: to reproduce an impulse signal as accurately as possible.

An impulse is a massive, instant burst of a signal. If reproduced perfectly, that signal can be shown (mathematically) to contain the full frequency range with no phase issues. Eclipse’s logic is that if its speakers can reproduce the impulse properly, every other aspect of sound quality will be covered, too.

It’s an aim that’s easily stated, but with moving-coil drivers, impossible to achieve in practice. A conventional multi-driver design struggles when it comes to reproducing an impulse signal accurately, so the obvious choice is going the single-driver route.

However, here’s where the laws of physics get in the way. No matter how much work Eclipse’s engineers do on the cone, motor system and cabinet volume – and they’ve done a lot – a single driver will always struggle to deliver a reasonably full and even frequency response.

At low frequencies, it’s all about moving lots of air. The 10cm driver used here is always going to struggle to do that, no matter how much throw it’s capable of. So it comes as no surprise to find that these Eclipses don’t go particularly deep in the bass, despite the enlarged rear reflex port arrangement.

The story is similar at higher frequencies. A drive unit has to be light and rigid to reproduce treble properly (it has to move many thousands of times a second) and the driver size Eclipse has chosen just can’t do that as well as a typical 25mm tweeter might.

The result is a treble that lacks the refinement normally found at this price level. There are also issues with limited loudness capability, power handling and sensitivity (a rather low 84dB/W/m).

However, within the innate limitations of moving coil design, it’s clear that the development Eclipse’s engineers have carried out on the TD510ZMk2 has improved matters significantly over the previous version, which was launched in 2005. This new one definitely sounds smoother, weightier and more tonally balanced.

And while the single-driver approach has limitations (as do all alternatives),

its strengths are mighty persuasive too.

Using a solitary unit to deliver the whole frequency range eliminates the integration issues that plague multiple drive units, plus there’s no crossover to spoil signal phase, blur resolution or flatten dynamics. All crossover networks suffer from these issues to some degree.

Of course, it takes more than a specific drive unit configuration to paint a convincing sonic picture. There’s plenty of innovative engineering here.

For instance, the drive unit isn’t bolted to that curved enclosure, as would be the normal way. Instead, it’s held by a heavy internal anchor, which in turn feeds mechanical vibrations into the stand. The well-damped cabinet is an airtight shell around this structure – see diagram below.

Eclipse has worked hard on the 10cm drive unit, going through 40 samples before it was happy with the results. The new unit has a reshaped glass-fibre cone that’s lighter and better behaved than before, while travel has been increased by almost 40 per cent – a huge amount. Distortion levels are reduced too.

The curved cabinet is made out of ABS (similar to the plastic Lego bricks are made of) and is 14 per cent larger than before. It naturally avoids all the colourations and flexing that wooden panels invariably suffer from, and the smoothed shape reduces reflection effects. The enclosure also floats on the outstretched arms of the anchor and is merely an sealed cover for the speaker internals.

The effect of this arrangement (and the enclosure material) is minimal cabinet vibration, leading to a cleaner sound. The cabinet’s egg-like shape helps to avoid sonically damaging internal and external reflections too, which helps with the TD510ZMk2s’ excellent stereo imaging and resolution.

It means that Kate Bush’s vocals on 50 Words For Snow, for instance, are as direct and communicative as you like. There’s a lifelike fluidity about low-level dynamics that makes her voice sound so much more convincing than traditional rivals manage – even three-way designs with a dedicated midrange unit tend to sound vague and blurred in comparison.

Another positive aspect of Eclipse’s approach is a stunning way with stereo imaging. We preferred to sit relatively close (around 2.5m away), with the TD510ZMk2s angled-in to cross just in front of the listening position.

The easy-to-adjust speaker heads (held in place by clever adjustable clamps) need to be firing directly at ear height and, ideally, should be away from any rear wall, too.

Get it all right and they set a wonderfully solid soundstage. Vocals and instruments are locked in place with absolute stability, with panned effects coming dramatically to life.

Take a 24-bit/192kHz recording such as Beethoven’s Piano Concerto No.5, and it’s incredibly easy to place instruments within the sonic picture. That pinpoint clarity also makes it easy to discriminate the degrees of depth in stereo imaging – something not always easily done.

Given their aim of reproducing an impulse properly, it comes as no surprise to find that the 510s define the leading and trailing edges of notes confidently. More than that, these speakers convey the pace and rhythmic aspects of a good-quality recording superbly – better than any multi-driver alternative we can think of.

Their terrific way with dynamic subtleties makes them a really engaging listen. Even with hard-charging material such as Prince’s When Doves Cry, the results are enticing. These speakers latch on to the sparse rhythm track and wring it for every last bit of enjoyment.

Of course, every speaker makes compromises. The ones Eclipse has chosen result in stunningly detailed speakers that time brilliantly. They image better than any rival we’ve heard, and organise even massively complex music in a clear and intuitive way.

While they’re probably the most rounded speakers the company has ever made, they remain a divisive choice – but there’s no denying they do things that no conventional rival can match.