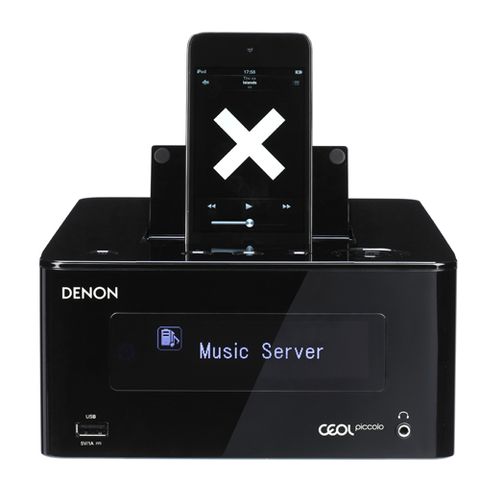 No matter what the source, the CEOL Piccolo will play all your music in superb style

Just how invested in digital music are you? Denon’s hoping the answer is ‘a lot’ because, in a first for the company, it’s launched a micro system without a CD drive.

A close relation to the original CEOL on which we were so keen (and which continues in a slightly revised form), the CEOL Piccolo ditches the optical drive in favour of a slimmer chassis and pure digital tuneage.

Thankfully, wherever you like to get your music (as long as it’s not directly from a disc) the Piccolo has you covered. Still like ripping your own CDs? The Piccolo will access them from your computer or NAS.

More of a Spotify or Last.fm fan? The Denon connects directly to both and even comes with a free three-month subscription to the former, saving you a cool £30.

Want to go the opposite way with some seriously hi-res music? Support for 24-bit/192kHz studio master tracks is built-in.

Oh, and there’s a 30-pin dock and digital USB connection for iPods. Did we mention AirPlay? No, well you get that, too. Take a look at that £260 price and you could be left wondering what the catch is. Spoiler alert: there isn’t one.

First impressions are strong – this is a very compact unit, even by the standards of micro systems, and that means it will happily sit on the average bookshelf, which is where we suspect most Piccolos will live. It’s also nicely styled and built, albeit using nothing more classy than glossy plastic.

Set-up is very straightforward, too. Connect to your network (we’d recommend ethernet for extra simplicity and audio quality, although wi-fi is also built-in), power-on and within just a few presses on the remote you’ll be connected and ready to go.

Admittedly, logging into Spotify or Last.fm does involve typing in email address and passwords using the alphanumeric buttons on the remote control.

As for speakers, we’ve seen the main DRA-N5 unit here bundled with the dedicated SC-N5 speakers for £320, but the standard terminals mean you can connect whatever you like. The Q Acoustics 2020i would be our first choice.

Before getting stuck straight into the world of digital music that’s opened up to you upon turning on the Piccolo, it’s worth downloading the free Denon Remote App.

Available on iOS and Android (no Windows Phone 8, unfortunately), it facilitates almost complete control of the system via smartphone, a significantly nicer way to interact with the micro system than the bundled remote control.

While a little sluggish at times, especially when opening folders from a NAS, the Denon app scores well in terms of presentation and has a couple of neat features, including a favourites list that you can add tracks to for quick access from the home screen, plus the ability to create playlists on the fly.

True, you can’t mix sources such as Spotify and a music server in the same playlist (as you can with Sonos), but many rivals miss the feature out entirely so its presence here is appreciated.

Right, now it’s time to get stuck in, and we head straight to the virtual candy shop that is Spotify. Settling on new Everything Everything album Arc and, in particular, the single Kemosabe, we’re treated to a fabulously upbeat rendition of the math-pop tune.

There’s lovely balance and weight, impressive width to the soundstage, and a level of control that means not even the twinkling synths on this 320kbps stream can coax an ounce of brightness from the Denon. Put simply, a Piccolo plus Spotify equals a superb listening experience, and for some people that’s as far as they’ll ever need to go.

Make an effort with higher-quality tunes and you will be rewarded, though, with the Denon more capable than you might expect (considering the price) of reaping the benefits of greater bit-rates. Try an uncompressed rip of Villagers’ {Awayland} and the folky guitar work emerges with fabulous texture and warmth.

Compared with rival micros the Piccolo produces a fuller, more organic sound, one with weight and substance behind each note. At the same time this is an airy and spacious soundstage, but one that manages to create separation between instruments while remembering that the most important element is the ensemble.

Take that final step and play a 24-bit studio master file and the Piccolo obliges with sound that’s simply stonkingly good for the money. There’s just so much nuance in the voice that counts in the 24-bit/192kHz version of REM’s Country Feedback, and so much texture to each angry strum of the acoustic guitar, while the occasional strike of the tambourine twinkles crisply from the melancholic ensemble.

Again, it’s the extra fullness compared with rivals that really impresses. It’s this that lends tracks more drama and emotional resonance. Notes reverberate and resonate more organically, vocals sound more human, and the presentation is more heartfelt as a result.

True, there are occasions when it feels as though the Denon is pulling its punches just a little, but that’s far preferable to over-aggression, something that’s common in hi-fi kit at this end of the market. Still, a little extra attack wouldn’t go amiss if Denon were to produce a Piccolo Mk 2.

Unsurprisingly, there’s no discernible difference in sound quality whether you use the dedicated dock or digital USB socket to connect your iPhone, and while there’s a smidge of drop-off when you send the same track via AirPlay, it’s certainly not significant enough to put you off taking that easy wireless option.

And if you ever get tired of listening to music you can always switch to the internet radio, which gives you access to thousands of stations from around the world as well as boat-loads of podcasts.

Whether you opt to catch up with the all-too-brief Adam & Edith Show from BBC Radio 6 Music or listen live to 5 Live Sports Extra’s football commentary, you’ll hear rich, natural voices projected clearly from the speakers.

Not only does the very reasonably priced CEOL Piccolo play anything you’d care to listen to, from wherever you might like to get it from, it does so with aplomb. Go on, ditch those old optical discs – Denon’s got your back.