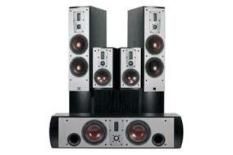 The Dali hides its sensitivity under a brick outhouse exterior. Nothing, though, can hide the enthusiasm of its high frequencies

Appearance can be deceptive. For example, there's a fantastic lack of sensitivity to the way this Dali Mentor 5.1 system looks.

It surely has plenty of presence - those Mentor 6 front speakers are more than a metre tall, and the Vokal centre speaker is nearly as wide. Anyone sitting in the sweet spot will be in no doubt as to where the thick end of six grand has gone, even before the speakers sing.

The system's subtle-as-a-bull impression, though, disappears as soon as it starts to do its thing. The soundtrack to No Country For Old Men illustrates its capabilities.

Least surprising is the scale of sound generated. All the audio action takes place on a wide, deep soundstage and there's ample space to manoeuvre effects.

The subwoofer, packing a 25cm driver, is capable of taut, punchy low frequencies to underpin the floorstanders' considerable bottom-end. There's unflappable authority to the way the Mentor 5.1 goes about dishing the low-end stuff and tremendous speed to bass,too.

In fact, this is a fast, accurate listen across the frequency range. Given the size of the centre speaker, the well-modulated and communicative midrange is no more than we expected, but there's no guarantee a package is going to deliver transients, or steer effects, with anything like this alacrity Few systems, at any price, combine this low-end tenacity, detail retrieval and speed of response.

So where's the fifth star? Well, the problem is at the top of the frequency range. It's also worth noting Dali's commitment to hybrid tweeter design as the system features 10 tweeters.

The top end is never less than crisp and forthright, and requires only the slightest provocation to spit nastily. Matched with an unsympathetic amplifier (and there are plenty), it can be an uncomfortable listen. Positioning the Mentor 6s facing dead-ahead, rather than toed-in, calms the treble a little. But not enough.

If you've the room, the money and the necessarily benign amplification, the Mentor 5.1 is a swift, communicative, insightful powerhouse of a system. Which is not exactly as it appears.