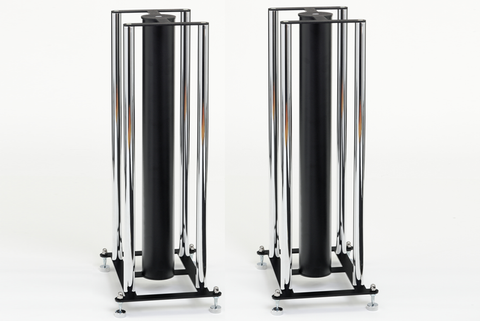 There’s probably a joke here about ‘standing’ out, but we’ll spare you that hilarity. Nevertheless, that’s exactly what this year’s – and last year’s – Award-winner does.

The FS104 Signature has five columns: a large one in the middle and four satellites. Assembly is fairly simple, especially for anyone who’s ever played with construction sets or a certain brand of Swedish furniture.

There’s something elegant in the Signature’s simplicity which promises to complement any set-up. There’s an all-black option but, for contrast, the satellites also come in gold, chrome and brushed chrome. It’s not all about looks either – these stands are practical too.

The satellite columns help to keep the unit totally rigid, while the central column can be loaded with Custom Design’s Inert Filler (£20, sold separately). We recommend doing this to get the best results.

We tested the Signature with a variety of standmounters, including the Q Acoustics 2020i and ATC’s SCM11. Overall, these stands allowed our kit to perform with more control and precision than did their rivals.

Compared with their competitors, music sounds clearer, livelier and has better timing. The bass is punchy, but then that’s the case with many stands at this price. What distinguishes the Signature is that high-end detail is very agile, which balances things out nicely.

If you’re after stylish, reasonably priced stands that make the most of your speakers, you need look no further.