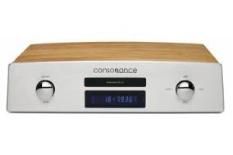 The Consonance is not without charm, but it’s short on tact and can prove wearying

There's plenty of eccentricity on display here – after all, how many other CD players can you think of that incorporate patio decking as a design feature? Or have ‘D-pad' control knobs that feel like they're attached by bungees? Exactly.

There are less obvious idiosyncrasies, too. Unlike a lot of similarly priced competitors, the Consonance Reference CD2.2 incorporates a valve (a Sovtek 6H30, numbers fans) in the unbalanced RCA output path. Unlike many, it does without balanced XLR outputs.

The disc tray slides smoothly and silently shut with a flick of the fascia toggle. Our copy of Mogwai's Come On Die Young loads rapidly, and it doesn't take the 2.2 long to establish its modus operandi.

The top of the frequency range is delivered with well-judged aggression, and the whole presentation integrates neatly. If your tastes run to the forceful and up-front, the Consonance should prove engaging company.

A change to P.P. Arnold's (If You Think You're) Groovy reveals a few shortcomings, however.

Verve, but detail is lacking
Detail is sacrificed to the CD2.2's galloping assault, and during quieter, more reflective moments the Consonance can almost be heard drumming its metaphorical fingers as it waits for another chance to dig in and kick off.

There's a lot to admire in the 2.2's verve, but our favourite players at this price offer the sort of subtlety the Consonance confuses with prissiness.