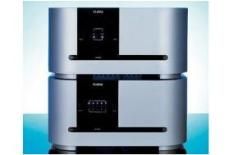 Can one amplifier, made up of the Classe SSP-800, CA-5200 and the CA-2200, really deliver high-end sound with both music and movies? This is the best solution we’ve heard yet

The CA-5200 power amplifier, which weighs 55kg, consumes 1056W in use and outputs a prodigious 5 x 200W, rising to 370W per channel into 4 ohm speakers (such as the Monitor Audio Platinum models we used for our test). It runs very hot, but usefully features an extensive range of inputs, with both XLR and RCA sockets included.

The new element in the test is the SSP-800, an HD-Audio-friendly surround processor able to perform equally well as a stereo preamplifier.