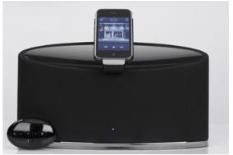 There aren't many iPod speaker docks that have had the impact of B&W's Zeppelins. The original B&W Zeppelin set the bar for systems of this ilk back in 2008.

And then, last year, the British manufacturer brought that Zeppelin ethos to a smaller box and budget with the Mini.

The Mini looks at its best with an iPod Touch or iPhone attached. You can then tilt the docking cradle through 90 degrees and watch videos in landscape format or use Cover Flow to scroll through your music.

The Mini allows you to sync your iPod with iTunes while in standby. You can even play your iTunes collection through the dock via its USB input and control iTunes via the palm-sized, pebble-esque remote control.

Instead of using the iPod's internal DACs, the Mini extracts music in its purest digital form and does its own conversion and file processing to produce the best possible results. And the results speak for themselves. The Mini picks up subtleties and details that aren't acknowledged by lesser systems.

Exceptional detail and control
Bass isn't as generous as some, but low frequencies from the two 18W speakers are taut and controlled.

The Mini's openness and even tonal balance allows it to extract a level of detail throughout the frequency range that other docks can't match. Spin Paloma Faith's acoustic cover of Sexy Chick and you're taken aback by the natural tone of the piano and the subtle dynamic shifts.

This level of composure doesn't stop the Mini from having a good time. Its playful character is evident as it fires out the electronic, upbeat tempo of Dizzee Rascal's Holiday.

We've pointed numerous iPod owners in the direction of the Zeppelin Mini and will continue to do so. For pure all-round performance, you won't find a better proposition at this price.