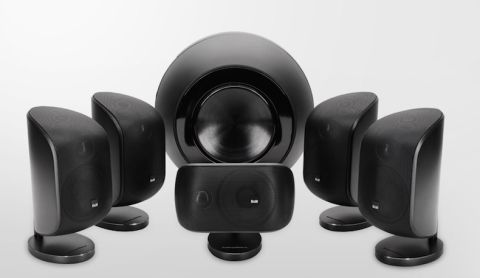 Best style package £1800+, Awards 2014. This Bowers & Wilkins Home Theatre package is an impressive evolution - it ticks all our performance boxes

It's good that the B&W MT-60D home cinema speaker package is such an exciting product – after all, it's been a while coming!

B&W’s Mini Theatre concept has been an Award winner in various guises since its inception, so the absence of a new package last year was something of a surprise. However, judging from the new MT-60D, it looks like the team at Bowers & Wilkins was merely taking its time to ensure the latest addition to the range was absolutely right.

This is much more than just a running tweak: part of the reason for the MT-60D model name is tthe inclusion of a new version of the near-legendary PV1 active subwoofer, a long-term favourite around these parts.

Despite its still-fresh looks, the familiar near-spherical design – with its 'balanced drive' back-to-back woofers – actually dates back to 2004: this new version adds digital signal processing as part of a range of improvements, and becomes the B&W PV1D.

The DSP system helps extend the sub's low-end capability, using dynamic bass EQ to monitor the amount of low-end boost delivered to ensure both the amplifier and drive units remain in their 'comfort zone', and also offers user-adjustable equalisation to suit different applications.

For example, should you want to use the PV1D in a 2.1 configuration, it provides preselected EQ modes to help integrate it with any one of six different types of B&W speaker. It's all controlled via an OLED display and touch-panel interface mounted on the central band of the sub's enclosure, and you can save your preferred settings as presets.

In addtion, you can connect the PV1D to a Windows computer using its RS-232 socket and a cable supplied. This enables the use of B&W's SubApp – available as a free download from the company's PV1D support page – to get deeper into the subwoofer's settings and configure it from the listening position.

As well as adding all this DSP cleverness, the sub's twin 20cm drive units and 400W Class-D amplification have also been tweaked: B&W claims the result is a subwoofer with all the speed and agility of its predecessor plus considerablly greater bass extension, enabling it to go lower and louder.

The M-1 satellite speakers, used for the front left/right/centre and surround channels, may retain the same name as the previous Bowers & Wilkins model and have had only a subtle cosmetic tweak, but internally they’ve been completely redesigned.

The tweeter and mid/bass driver are both new, the former taking design cues from the high-end Nautilus design – in which driver sits on the front of a tapering, damped tube – and the latter borrowing the anti-resonance plug first seen on the PM1 speakers.

The new, longer throw mid/bass driver (right) uses a four-layer coil for better efficiency, while the M-1 as a whole uses a simplified crossover and new, much longer relfex-tuning port to assist the bass.

The result, it's claimed, is a frequency response down to around 55Hz, rather than the 90Hz limit of the older speaker. That promises better integration with the subwoofer, and also gives B&W cause to be bullish about the M-1s' performance as a stereo pair.

Completing the new design are neater speaker terminals and an updated, sturdier design and finish to the integrated stands. The speakers can be wall-mounted with the hardware supplied, while floor stands are an optional extra.

B&W says it's proud of the advances made throughout the package, and that every aspect of the manufacturing process for the M-1 speakers and the PV1D subwoofer is now taken care of in-house, in the UK.

Get the speakers up and running and it’s the familiar B&W sound, only different. Or we might say, ‘better’…

The Blu-ray of Warrior is a bosh-a-minute once it gets going, and the MT-60D delivers plenty of dynamics and aggression thanks to an extra layer of low-frequency presence and grunt.

It’s not just the bass that’s bolstered: there’s extra life at the top end of the spectrum, too, with the treble definitely sounding more exciting. Dialogue, crashing glass and the like have real crunch and clarity.

The level of detail is exemplary, whether with deep, booming explosions expertly controlled by the brilliant subwoofer, or with dialogue or effects where the satellites are doing the lion’s share of work.

Despite the relatively small size of the speakers, there’s real scale and breadth to soundtracks, while surround effects are steered confidently and seamlessly, the matching satellites obviously helping.

The handover between the satellites and sub is almost imperceptible, as it should be, thanks to the new M-1s' extra low-end extension, but if there's a note of caution to be sounded it's to do with the added excitement available in the treble.

We’d emphasise some care when partnering this speaker package – don’t go for one of the brighter sounding home cinema amplifiers such as the Pioneer VSX-LX55, but it will be fine with comparable Yamahas or Onkyos.

And it's also worth noting that M-1 satellites work best in close proximity to a wall, and in fact Bowers & Wilkins expects most people to wall-mount them – a point to bear in mind if you do plan to use the stands.

So, this package certainly delivers with movie soundtracks, but B&W's work has also paid dividends with music, whether in multichannel or stereo: the MT-60D sounds fast and agile, so The Chemical Brothers’ Swoon sounds explosive and dynamic.

However, the sound is controlled, too: play something a little more delicate, such as James Vincent McMorrow’s cover of Higher Love, and there’s detail and texture in the singer's voice.

This is a true all-rounder: it's adept at everything you’d want a 5.1-channel surround speaker package to do, confident in stereo, beautifully built, and versatile when it comes to installation.

B&W's new MT-60D has been a long time coming, but the wait has definitely been worth it.