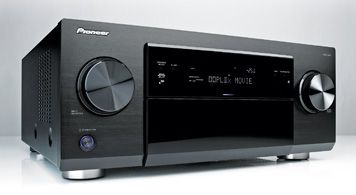 Best home cinema amplifier £700-£1500, Awards 2011. An amp that’s fun to interact with and thrilling to listen to, this Award-winning Pioneer is superb

There’s no denying that Pioneer’s LX55 is a serious advancement over its predecessor – so much so that the company has skipped a model number.

The array of inputs and outputs is as monstrous as you’d expect from a receiver at this price, so you get seven HDMI inputs and two outputs, plenty of digital and analogue audio ins, plus composite and component connections that can be upconverted, upscaled and output to a display at 1080p resolution.

There are also line-level outputs for two extra zones, or you can use a set of speaker terminals for a powered zone 2, although this will limit you to 5.1, rather than 7.1, in the main room.

That’s all lovely and high-tech, but not exactly unexpected. Pioneer does have a few surprises up its sleeve, though.

Apple AirPlay on board
For a start, this receiver is equipped with Apple AirPlay – via which you can access streaming services such as Spotify. it’s also the only one that supports 24-bit/192kHz studio masters across a network (which, by the way, it can connect to wirelessly thanks to a bundled adapter).

Of course, throwing techy bells and whistles at a product might get you headlines – but it won’t get you five stars, at least not in this magazine. The good news, then, is that the Pioneer performs absolutely brilliantly.

Kick off with Fast Five and what immediately strikes you is how crisp and fast-paced this AV amp is. The entirely ridiculous train-based car theft at the beginning of the film has the kind of sonic complexity to make many a receiver quake in its boots, but the LX55 masters it with ease.

It’s just so agile, in just about every way – dynamic shifts, whether they be explosive crescendos or slow-building arcs, are despatched with ease, while effects are placed precisely where they should be in space and time. The tautness and tonality of the bass deserves a special mention, too.

Great with movies and music
A switch to Naxos’ Blu-ray of Chopin’s Piano Concerto No.1 sees the LX55 squeeze out the last little bit of dynamic subtlety and resolution that the others miss. When combined with that rhythmic precision, it makes for a very musical character by AV-amp standards.

Are there any flaws? Well, the Yamaha RX-A1010 offers a completely different flavour – one with a slightly more expansive and cohesive surround field – and that could sway it for some folk.

The other thing to bear in mind is that while the Pioneer’s treble sparkles in a lovely, controlled way, it can be pushed into a little brightness by thin-sounding partnering equipment – so you do have to be a little careful over the partnering speakers.

Make the effort, though, and you'll be amply rewarded.