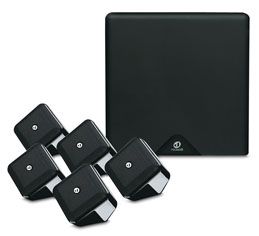 Shinier than before and just as enjoyable to listen to, this excellent little Boston Acoustics package is a must-hear

We liked the Boston Acoustics' original Soundware XS 5.1 package so much that we gave it an Award in 2010.

As this SE upgrade costs the same as the old Award-winner, and given we didn’t think there was much wrong with the outgoing package in the first place, it’s good to find the changes aren’t too radical.

The finish (either black or white) is smoothly glossy rather than textured, the speakers’ rear panel is now grooved to allow a degree of cable management and the handy wall brackets now have a cover to hide their unsightly articulating bits.

Subtlety and dynamism in equal measure
Otherwise, it’s business as usual – and that, with only mild qualification, is A Good Thing. Each angular speaker houses a 64mm driver and 13mm tweeter, and the considerably bulkier subwoofer uses 100 watts of amplification to power a downward-firing 20cm driver.

As a unit, the speakers and subwoofer combine to produce a sound that combines subtlety and dynamism to winning effect.

Despite being identical to its four partners, the centre channel delivers dialogue in a focused, detailed manner and manages to project from the soundstage even during the most frantic action-movie moments.

And the subwoofer has the speed to keep up with the speakers, too, offering meaningful reinforcement without making a song and dance about it.

The system even has a passable stab at reproducing music, handling tempos well and maintaining its poise even when the going gets complex.

In short, then, the neat cosmetic smartening-up hasn’t undermined the Boston Acoustics Soundware XS 5.1 SE’s performance one iota, which means it’s just as easy to recommend as its predecessor.