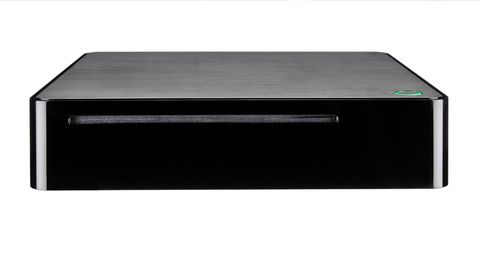 Worth a try if you need to save space, but you can do better for the money

Toshiba has had a tough time with its Blu-ray players lately. The last one we reviewed was last year’s BDX5400 (two stars). Now we have the Toshiba BDX5500, the latest flagship model. Will it fare better than its predecessor?

The thing we really liked about last year’s model was its small size and discreet looks. Toshiba has taken this further: the BDX5500 is even smaller and more inconspicuous. It’s a tiny box measuring just 5x20x20cm.

You can also set it up vertically, propping it up with a small stand included in the box. You’ll have no problems finding a home for this, and we like the departure from the usual rectangular slab.

The small stature may be partially down to the lack of a disc tray: what you get is a slot-loaded drive sat next to a couple of touch-sensitive buttons.

At the back, you’ll find an HDMI output, a USB port and a digital coaxial output. There’s an ethernet socket, as well as built-in wi-fi.

This Blu-ray player is not particularly good to use. The Blu-rays we tried took more than 30 seconds to load, which is very slow compared with rivals. We’re not great fans of the interface either. It’s far from streamlined, and most operations lag.

This is the same interface we’ve seen on Toshiba products the last couple of years, and we’re disappointed it has not been overhauled. Connecting to wi-fi took a long time; we’d stick with the ethernet socket. We’re also baffled by the smart hub, which is dominated by a couple of large photographs. In the past, a shortcut to ‘Acetrax’ would occupy this spot.

Now that the service is defunct, this is literally a waste of space. There are other apps, however, with the key ones being YouTube, Netflix, Picasa, and BBC iPlayer. We’d like to see more, but perhaps performance will make up for it.

Sadly, this is not the case. Picture and sound performance are decent, but the Toshiba doesn’t manage to distinguish itself. If you want your images to pop, you’re in luck. It’s a punchy picture with vivid colours, sharp edges and a decent amount of detail. We think it’s overdone, however. We’d like more subtlety.

Instead, the extreme sharpness makes the picture processed and unnatural. Still, it works fine for 3D, where the darkness of the glasses calms the picture. We also have issues with motion. There’s a tricky panning shot in Edge of Tomorrow that makes the Toshiba trip up.

Switching to DVD, the video shortcomings are less apparent. The Toshiba does a decent job of upscaling, with solid lines and little noise. Again, it’s not the subtlest picture.

The audio performance is decent. It sounds a little brash, and we could do with more punch, but there’s a nice amount of weight and detail.

Toshiba has taken a step in the right direction – but it’s not far enough yet.