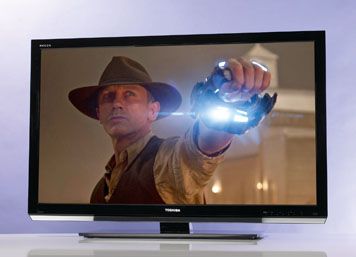 This rather slim set comes from Toshiba, a company that’s used to operating around the budget end of the market.

A screen this size for this sort of money is on to a winner from the start for many people, but will the performance and the spec be able to deliver its side of the performance-per-pound bargain?

Slim and stylish design
We certainly like the cut of the SL738’s jib. It uses an edge-lit LED design, which allows for a slimmer profile than tradioptional LCDs. Indeed, it measures just 37mm in depth, which is ideal should you be planning to wall-mount your set and make the most of that measurement.

It even looks rather smart on the pedestal stand.

Edge LED technology – with LED lights arranged around the edge of the screen providing the backlight – points to a TV that’s fairly technologically advanced, but sadly the rest of the spec doesn’t quite live up to that promise.

There’s no sign of internet TV or networking capabilities on this TV, while the lack of a Freeview HD tuner might be more off-putting for the average punter.

Watching standard-definition off-air stuff, the image is clean with vivid colours and decent detail. There’s some noise around edges and with harder to render backgrounds – brick walls prove tricky – and black insight could be better, but it’s a decent stab.

Sonically, it really is poor, sounding thin and lightweight, and more than a little on the bright side. Sound that stands out as poor in the flatscreen world is a bad thing.

Still, pressing on with video, there’s again plenty to enjoy with the picture. Motion is handled admirably (keep the processing to a minimum to avoid an unnatural feel) and colours are again bright but do lack a little punch and subtlety.

The level of insight is decent, but can be bettered elsewhere, and black levels lack a little punch. Results
from the Toshiba’s scaler, used with DVD, prove that a budget player will probably do a better job in most cases.

Smooth motion and vivid colours
On skipping to Blu-ray, we noticed the SL738’s impressive viewing angle as we changed the disc – which is a bonus.

Again, smooth motion, stability and bright, vivid colours – helped by a disc like Toy Story 3 bringing such a splendid source to the screen – are the positives. But the overall image lacks insight and subtlety.

We feel like we’ve been here before: this Toshiba is not without merit, but is found wanting against the best, in this case in terms of performance – notably the sound – and specification.