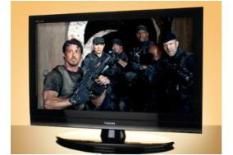 Competitively priced, but this Toshiba has worries of its own

In a way, the Toshiba 32RV753 is impressive in that it even exists at all. For £400 Toshiba offers a handsome enough TV with Freeview HD reception, DNLA connectivity (wireless with a cost-option dongle), four HDMI inputs and a pair of USB inputs, too.

It's even got an SD-card reader. It looks uncommon value even before it's powered up. On-screen menus are crisp and logical, and the remote control is simple enough, too. The Toshiba is swift and straightforward to set up.

There's more than a hint, though, of softness to standard-def transmissions, accompanied by more picture grain and noise than is ideal.

That softness and lack of rigour when drawing edges is also in evidence when the 32RV653 is upscaling DVD images, though picture noise is suppressed more effectively. Motion isn't handled too confidently by the Toshiba, and the more complex the scene the greater the problems.

A switch to Blu-ray content, Burn After Reading in this instance, reveals the best and the worst of the 'RV753. On one hand, the Toshiba delivers deep, believable black tones, clean and bright whites and business-like edges.

Contrasts are a little disappointing, too, the rather dark overall presentation a surprise when you consider how bright the screen is when it's idling. Sound is a little stressed and sibilant, which means it's pretty much par for the course.

On balance, then, this Toshiba is compromised, you could do so much better for (relatively speaking) not that much more outlay.