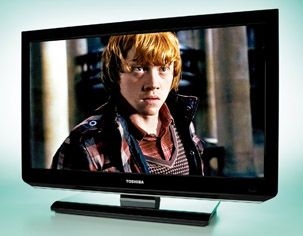 Clearly one of Toshiba’s budget sets but it needs to perform better, be cheaper or pack more features to be a real contender

When it comes to producing televisions for the consumer market, Toshiba has struggled of late.

We’re looking forward to bringing you an exclusive review of the company’s first passive 3D – but in this, the 32HL833, we have a 2011 model from the other end of the price and technology ladder.

No frills equals few thrills
There’s always a place for affordableTVs that are low on frills but on high on value. Sadly, we’re not sure this set, which has a whiff of last-generation about it, can even fill that gap.

As premium TV manufacturers have found at the other end of the spectrum, the big boys are capable of knocking them for six more often than not with their own premium offerings: and they can do it at this end, too, with cheaper, better-equipped sets.

So there’s no great saving to be had with this TV. You won’t find any internet TV functions, which we could live with, but the lack of an HD tuner is more of
a concern.

A high-quality performance (for the money) is clearly paramount.

Sadly wanting in all areas
The interface and remote control combination certainly won’t cause any great waves of excitement, and while the chassis is slight and not unattractive it won’t leave your guests green with envy.

So it’s down to picture and sound. And it’s all found wanting. The standard-definition tuner struggles to present a solid picture, being a little rough around edges and introducing some noise.

We jump to a Blu-ray, and the always brilliant Terminator 2, to see the Toshiba at its best – but in comparative testing against others, it falls short. Black levels lack depth and uniformity, tricky details are glossed over and images are neither subtle nor dynamic.

Watching Tangled – in 2D, naturally (though, for the record, the 3D Blu-ray transfer is great) – the vivid colours lack punch and the animated figures aren’t given the sense of depth that we’re treated to on superior sets.

Sonically it holds its own better than in other areas, but this is in part down to others’ weakness rather than any particular strength here.

The speakers, while fairly clear, are on the bright side and struggle to keep their poise when pushed to louder volumes.

Hard to recommend
It’s difficult for us to recommend this television. While the spec sheet includes a full HD resolution, LED backlight, (only) two HDMI inputs, plus PC and USB connections, elsewhere you can have internet TV and an HD tuner for the same money.

Not to mention noticeably better performance.

Just as the premium end of the market has been squeezed, so too budget sets have plenty to do if they want to catch the eye: sadly, this Toshiba can’t manage it. Let’s hope the company’s new 3D sets are more on the money.