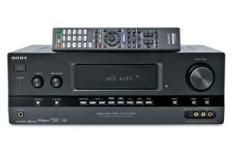 Best receiver up to £300, Awards 2010. The ’DH810 is a fantastic, affordable amp, and the perfect foil for an entry-level home cinema system

Recently we felt the combined force of Sony's first 3D TV, the KDL-40HX803 and Blu-ray player, the BDP-S570. The only item missing was a 3D-friendly home cinema amp. Step up the STR-DH810.

Build quality is as you'd expect at this price point: sturdy, but not as bomb-proof as pricier Sony kit. Power for this eight-channel amp is 100W per channel, identical to its predecessor, the STR-DH800.

If you opt to use the Pro-Logic IIz processing you can switch the surround back channels for front height speakers.Or, you can ditch both and bi-amp the front left and right speakers instead.

3D-ready out of the box
There are four, 3D-compatible HDMI 1.4 inputs and one output, that also doubles as an Audio Return Channel (ARC) so it can accept audio over HDMI sent from a compatible display.

The amp also includes 1080p upscaling and upconversion to HDMI. If there was one criticism of the STR-DH800 it was that it could tighten up at high volumes.

There's no sign of this with the STR-DH810. During From Paris With Love, when John Travolta shoots up a drug-trafficking Chinese restaurant, as you do, the Sony produces a powerful, detailed and substantial sound.

Budget amp with talent
Travolta's colourful language comes through loud and clear while bullets fly from all angles. Switch to Beyonce's I Am… Yours Blu-ray and the Sony displays decent musical ability for a budget AV amp, including impressive timing and rhythm.

Spending £400/£500 will bring greater dynamic rewards, but for those looking to build a surround system on a budget, the Sony possesses ample talent for the job.