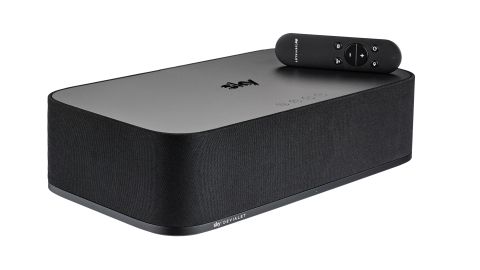 “Is it a soundbar? Is it a speaker? No, it’s a Soundbox!” And a Soundbox actually appears to be a cross between the two.

We’ve become familiar to soundbars taking the form of, well, a bar - but the Soundbox is closer to the size and shape of a giant lunchbox.

Even though its large proportions (37.5cm wide by 21cm deep) barely differ to that of a Sky Q box, that depth does demand plenty of room on a rack in front of your telly.

It feels well made, as does the neat and compact remote control, but we wouldn’t be tempted to put anything on top of it - or next to it, for that matter. Sky suggests you leave 15cm either side of the box to let the side-firing drivers do their work.

The Soundbox also combines the connectivity of both a typical soundbar and wireless speaker, with its 4K-supporting HDMI input/output and digital optical input for TV connectivity, plus USB input and Bluetooth connectivity for music playback.

The biggest curveball Sky is throwing here - bigger even than the oddball dimensions - is the price. The Soundbox is £249 for existing Sky Q customers, or £299 for those who want to spread the payment over three months. For everyone else, it’s now £499, down from the eye-watering original price of £800.

We can’t imagine many people will end up parting with £499 for the Soundbox (and we sincerely hope no-one paid £800 for one), but the expensive base price is a little easier to digest upon learning Devialet is behind the technology.

The French brand is the cool, rich kid of the hi-fi world, with its super-modern £1500+ Phantom wireless speakers and many-thousand-pound amplifiers.

But with its customer base limited to those who can afford such high-end kit, Devialet appears to be on a mission to engage with the masses by making “smaller, lighter and more affordable” products.

This venture with Sky into the premium (though not quite 'Devialet premium') soundbar market seems a sensible way of doing it. After all, getting the immediate attention of over 20 million Sky subscribers can’t be a bad thing.

For Sky’s part, it has acknowledged we can all do better than TV sound and, as a TV provider, the company is well positioned to deliver an alternative.

With Sky's profile and Devialet's tech know-how, this collaboration actually makes a lot of sense.

And Devialet has included some of its existing tech here. Like its Phantoms, the Soundbox has a sealed enclosure and uses the brand’s push-push woofer technology to deliver deep bass response.

There are six 7.5cm woofers (two at the front, two firing from each side) and three 5cm full-range drivers.

There's also audio processing at work to split audio frequencies to specific speakers – ambient sounds are delivered to the rear-side speakers so they can reflect them off a wall and back to your listening position.

Devialet’s AVL (auto volume level) sound processing also promises to analyse audio signals in real time - and consequently adjust them - so all of the elements of the film or TV programme’s soundtrack can be clearly heard.

There is no Dolby Atmos, only Dolby Digital Plus. Sky says that its Sky+ service doesn’t support the surround-sound format and therefore not all of its customers would benefit.

It's a blot on the Soundbox’s copybook when you consider the handful of soundbars that now support it, and the content is there to be enjoyed on Sky Q. Sky has instead focused purely on delivering an “immersive sound” – and who are we to argue with that?

To a large extent, that selective focus has paid off. The Soundbox impresses from the start, mostly thanks to its clarity and widespread sound. Those side-firing drivers disperse sound well, pushing it way beyond the width of the screen.

Despite its modest proportions, it isn’t short of heft or dynamism either. It’s a small box with a big presence – just don’t expect “surround sound”.

We begin by binge-watching Stranger Things 2 and, as the ‘80s nostalgia washes over us during the opening title credits, the synth theme tune sounds upbeat and clear.

In the car chase opening episode one, revving engines purr and the thumping bass underneath the action has enough presence to make an impact.

Low frequencies lack the definition to fully exploit the most devastating, bass-heavy blockbusters or music driven by low-end, and you get an unarguably punchier sound from the Q Acoustics M2. But ultimately the Soundbox is a capable and entertaining performer.

Its midrange impressively balances weight with expression, capturing the gusto of an enthusiastic Dustin – something that’s far less obvious via the 65in Samsung TV we connect the Soundbox to.

Sky has clearly prioritised dialogue delivery so, while its presentation isn’t the most evenly toned, it’s great for dramas and regular TV viewing.

Detail is impressive, too. It picks up subtle scratching of a record player’s needle settling into vinyl groove, pulling of wires between trees, and the sweeping of a broom across the floors.

Aside from the discounted price, there are other benefits to being a Sky Q customer where the Soundbox is concerned. Press the ‘?’ key on the Sky remote and you'll be greeted by Soundbox-specific audio settings.

There are three user sound modes: ‘Kids’ (which sets a limited volume), ‘Speech’ (with voice enhancement) and ‘Late Night’ (neighbour-friendly mode with reduced bass levels). All are effective, but we keep ‘Speech’ activated for clearer commentary during the Live ATP Masters 1000 tennis.

There’s also Q Sound, which aims to create a more involving audio experience. Sky identifies the metadata of the content you’re watching and match it to three sound profiles within the Soundbox – sport, music or cinema. When we tune into a football match, crowd noise is notably amplified and more atmospheric. It’s worth keeping on.

Even though it's now much more affordable than before, at its ‘full' price of £499, the Soundbox is still too expensive. But for existing and potential Sky customers, the Soundbox is a positive success and, at £249, competitively priced. Our only reservations are: we wish it had a more bar-like form, and a little extra punch and low-end definition wouldn’t go amiss either.

Sky has tightened its grip on the home cinema chain, from service to set-top box and, with the Soundbox, it’s now tackling the sound quality of your sport and movies. Perhaps the only thing left for Sky is to make its own TV.

See all our Sky reviews

MORE: Sky Q - everything you need to know