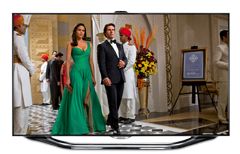 The Samsung UE46ES8000 follows hot on the heels of its 55in sibling, the UE55ES8000, which we gave a thorough examination in our world exclusive review not so long ago.

So, we have sky-high expectations of this TV, the 46in model – arguably the new key screen size – in this flagship range.

The ES8000 sports the same super-slim bezel as the 2011 range, but for a bump on the top that houses an HD camera and dual microphones to serve the integrated Skype capability.

There are Freeview HD and Freesat HD tuners, three HDMI inputs and the same number of USB connections for playing media or even recording from your TV.

There’s also a digital optical output for connecting to an AV receiver for sending digital sound, an ethernet connection for everything smart, plus integrated wi-fi, and legacy sockets including component and composite video.

You’ll also find a slot for Samsung’s Evolution Kit. This, the company says, will keep your TV up to date by allowing the inclusion of new features as they become available.

If the two remote controls bundled with the TV weren’t enough, you can wave and shout instructions at this set, too. Press a button on the smarter of the two remotes and then bark commands to adjust the volume, change channels or, more usefully, enter text.

This comes into its own when using Smart TV functions such as the web broswer, where entering text is otherwise laborious.

Ultimately the technology is work in progress: useful and at times effective – but we largely found ourselves using the remotes, and predominantly the standard one at that.

The smaller one does basic controls and sports touch-sensitive scrolling and a direct line to voice controls with a built-in mic.

Up and running, we can’t help but notice slight blotches to the backlight. That said, the issue fades as the TV warms-up, so it wasn’t a problem overall.

Both tuners are predictably efficient. Edges are a little sharper and colours a little more subtle with Freesat, but the Freeview HD tuner is clean and detailed with a natural colour balance, while scrolling text and fast motion is stable.

A Blu-ray disc gets the the best out of the 1920 x 1080-pixel screen. Despite the name, Killers proves surprisingly fluffy around the edges in storyline, but with a razor-sharp picture on the Samsung.

Skin tones have just the right colour balance and reveal every line and sag, while everything from hair to landscapes show off the set’s impressive contrast levels.

Clean, bright whites sit atop solid blacks, and ensure that this TV delivers plenty of insight to dingy corners or dark suit jackets even during the darkest scenes.

Switch to 3D and we’re pleased to report that Samsung has pushed the performance here, too. Two pairs of lightweight 3D glasses are provided, and they’re easier on the eyes both in terms of feel and design.

The more comfortable experience stretches to watching 3D content, too, with less crosstalk, smoother motion and a more stable image that still has a sense of depth.

Samsung’s Smart Hub still provides a wealth of online content. Almost too much, in fact, making for an interface that requires a moment to take in.

You can find the likes of Acetrax, BBC iPlayer, Netflix and YouTube in Samsung Apps, plus plenty more besides, from games, to things for kids, fitness fans and families.

Crucially, the UE46ES8000 does a good job of displaying even lower-quality content at close to SD TV quality. Lest we forget, Skype is served excellently thanks to the HD video camera and microphones, while there’s also DLNA connectivity via AllShare Play, which can play music and video from a NAS device or USB stick.

Play some music, and while we don’t expect miracles from the sound, miracles we certainly do not get. It’s budget iPod speaker quality which, while fine for day-to-day TV and no surprise compared with most flatscreens, is disappointing on such a high-specification set.

Add some external amplification and speakers if you can.

This is the top-of-the-pile set from the company that’s pushing Smart TV harder than anybody else; if you want to know what a television is capable of in 2012, then look no further.

For all the bells, whistles, shouts and gestures, the bread-and-butter tasks of watching TV, video and even 3D are where the ES8000 really excels.

See all our Television Best Buys