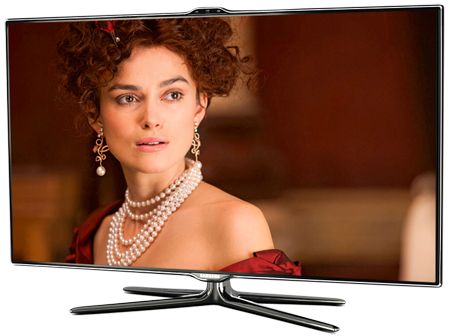 A great telly with dazzling looks and performance

Samsung certainly knows how to do gorgeous. This UE40ES7000 edge-lit LED active 3D set is a super-slim LCD beauty, and its swivelling claw-like metal stand adds to the charm.

Whether it’s an HD or 3D flick, the picture is crystal clear, with excellent detail definition. The ES7000 comes with twin Freeview HD tuners and Freesat, and it delivers bright and noise-free broadcasts, in both standard and high definition.

Samsung UE 40ES700: Blu-ray performance
But spin The Dark Knight and Samsung ups the ante with its excellent Blu-ray quality. The image is impressive, Gotham City displayed with sharp edges and a real sense of depth.

The colour palette is rich too, and there’s plenty of layers and subtle shifts in gradation, all of which add up to a naturally balanced picture.

Contrast levels are also well balanced: the black levels have depth and the punchy whites are clean. The ES7000’s white detail and motion aren’t rival-beating, however, with its UE40ES8000 sibling being its closest foe. But we prefer the 7000’s more realistic skin tones.

Samsung UE40ES7000: Sound and smart TV
Sonically, we’re not expecting much bass with such a narrow panel, but the sound is rather decent, with clear dialogue that never sounds harsh.

Samsung’s smart services also set it apart from the TV herd. Its Smart Hub, including a browser, apps, VoD and games – with the recent additions of Netflix and Google Talk – is fantastic.

There’s also a webcam on the top of the panel for Skype video calls. The Samsung even offers voice commands and motion control, Xbox 360 Kinect-style. They’re fun, but we prefer the convenience of the sleek Smart Touch remote.

Samsung UE40ES7000: VerdictThe dazzling looks and wealth of smart and online content aside, it’s the UE40ES7000’s picture that’s got us hooked. You’ll be entertained for hours when watching this TV, and it’s worth every penny of its price.