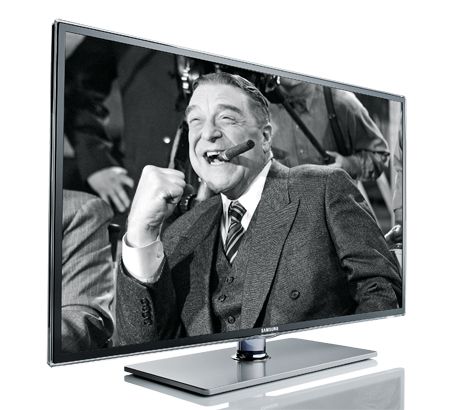 This smart Samsung struggles a touch with 3D content, but everything else is done in fine style

It’s fair to say that Samsung has led the way for the latest generation of TVs. Smart, slim and sexy have been the three crucial characteristics for making the company’s sets stand out from the crowd.

And it’s worked, making Samsung the biggest TV manufacturer in the world. This set happily follows down that path.

An almost impossibly slim bezel and chassis, smart little pedestal stand and a slick interface led by the Smart Hub internet TV portal combine to leave you in no doubt that you’re using a bleeding-edge television.

Samsung was also the first company to give Smart TV content centre stage, and to this end the D6530 offers a class-leading selection, with catch-up TV from BBC iPlayer, films from Acetrax, BlinkBox, LoveFilm and now Netflix, social media apps, Skype, YouTube and more.

And it’s all accessible via a busy but intuitive Media Hub interface. Despite being underwhelmed by the sound of this set last month, we have to say it’s arguably the strongest sonically in this company.

But it’s all relative, mind you, so it would still be a good idea to add some sort of speakers.

An easy-on-the-eye picture
Watching films we’d certainly much prefer a bit more punch and power to the sonic presentation, and the same could be said for the picture.

Samsung prefers a smoother, slicker picture, communicating the finer nuances rather than shouting about the brightest whites or the boldest reds, for example.

In the Blu-ray of The Hangover 2, fast motion is treated with a steady hand, while low-light scenes show the Samsung capable of showing enough detail (if not the most rigidly uniform) and solid blacks.

There’s little sign of digital noise, either – all told, it’s an easy-on-the-eye picture. It’s more of the same with the Freeview HD tuner, which is sharp and detailed, and again takes a subtle approach to colour.

With two USB inputs on the side you can also add a hard drive should you want to record what you’re watching. This set is let down a bit by its 3D performance.

There’s more crosstalk than we’ve seen on some, meaning not only a poorer picture but one that’s more of a strain to watch.

But there’s still plenty to enjoy here, and it remains a smart buy should internet TV and stylish design be key concerns.