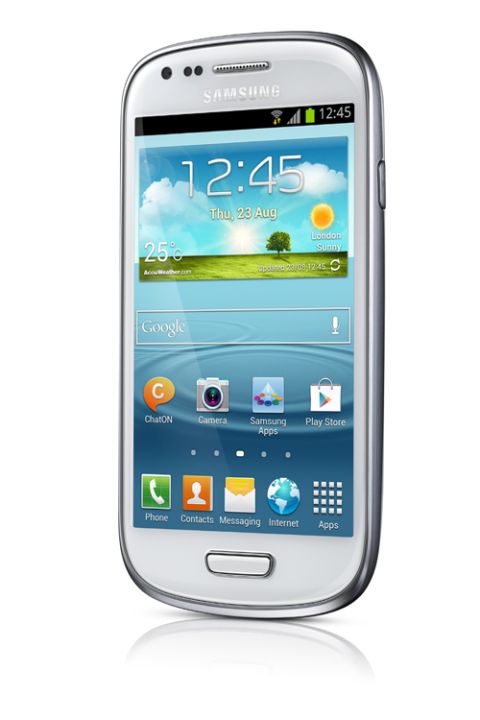 A highly capable handset, but one that is outclassed by cheaper rivals

This year has been the year of the Samsung Galaxy S3. Winning five-star reviews and a string of awards from all manner of publications, it was proof more than ever that a product doesn’t need to have an Apple logo on it to be seriously desirable.

However, with its 4.8-inch screen and high-end smartphone price tag, the S3 wasn’t going to be for everyone, so in steps the Samsung Galaxy S3 mini, in the hope it can work the same magic on the mid-range smartphone market.

At first glance, you could be forgiven for thinking the Galaxy S3 mini is simply a smaller version of its big brother. It features a similar polycarbonate body, with rounded edges and slightly curved back panel so it sits comfortably in your hand. It’s a lovely looking midrange handset, no doubt about it.

However, the 4in screen is much smaller when compared with its big brother, measuring in slightly smaller – though wider – than the iPhone 5’s screen. If your fingers are on the chunky side, you might find the on-screen keyboard tricky to use, but if you felt the original S3 was too big for your tastes, the mini might be more up your street.

It might be smaller, but the S3 mini is actually thicker than the original S3 at 9.9mm. Its mostly plastic body helps keep the weight down though – it weighs in at 111.5g, half a gram lighter than the iPhone 5 and considerably lighter than the 133g S3.

At the bottom of the phone a long home button is flanked by two touch-sensitive keys – ‘menu’ on the left and ‘back’ on the right. The menu key can also be held down for a few seconds to launch Google Now when you have a network connection.

As for other physical buttons – it’s standard fare. There is a volume rocker on the left edge of the phone and the power/lock button towards the top on the right. The headphone jack is on the top, while the micro USB charging port is on the bottom.

Overall the phone looks good and feels solid, but there’s nothing to make it stand out. Indeed, we felt that the silver plastic edging on the white model we tested cheapens the overall look of the phone - something we don’t perceive on the blue version of the handset.

This doesn’t cause too much of an issue when viewed in isolation, but when compared head to head, the mini lacks the clarity offered by the likes of the Google Nexus 4’s 320ppi screen – it’s particularly noticeable when looking at zoomed-out text on webpages.

The display packs the brightness that Samsung phones are known for, but colours look rather over-saturated for our tastes. AMOLED technology helps keep the blacks black in video playback, but more natural colour reproduction is offered by the Nexus 4, making it more enjoyable to watch in the long run.

The Galaxy S3 mini’s screen is passable, but it’s not outstanding and the fact is its quality now falls behind many of its direct competitors.

It’s not just the screen that has been pared down on the Galaxy S3 mini – just about everything has taken a hit, often leaving it underspecified in comparison with its competitors.

In place of the quad-core processor that made the S3 such a powerhouse, the mini features a less powerful 1GHz dual-core chip. Still, in day-to-day usage we found it more than capable. Internet pages load quickly, menu swiping and app loading is lag free and video playback is smooth. Even using Samsung’s Pop-up Play to stream a video in a pop-out window, while still browsing and emailing, went hitch-free.

Understandably it will struggle to handle some of the more graphic-heavy games made with beefier processors in mind, but Angry Birds and the like are handled without issue.

MORE: Samsung Galaxy S4 - everything you need to know

That said we did notice some lag on screen orientation when changing from portrait to landscape in messages and emails, and there is occasionally a slight delay upon pressing the home button to the screen lighting up.

It’s capable, then, but it lags behind some rival midrange handsets. The HTC One S, for example, has a 1.5GHz dual-core processor; and the recently released Google Nexus 4 packs a quad-core processor despite coming in at a lower price than either of them.

As for battery life, we found it to be on par with most other smartphones we test, with its 1500mAh battery lasting around a full day with standard use. Use it for extensive gaming, browsing or music listening and expect that to decrease.

The camera has come down in resolution from the S3’s 8MP to 5MP – what had been standard for a midrange Android phone until the likes of the HTC One S and Nexus 4 came through with their 8MP snappers.

Still, it performs well in good light, taking photos with little picture noise that will do just the job for grabbing snaps on the move.

That said, we did notice that when compared with photos taken on the 5MP iPhone 4S camera, colours looked a little washed out and cold, with whites taking a bluey tinge, particularly on photos taken inside. This was solvable – we tweaked the white balance ourselves rather than relying on the auto setting – but the 4S managed much better without requiring any intervention.

Autofocus can be a little on the slow side on occasions, with the shutter taking a while to fire, particularly in low light. And, as with many smartphone cameras, low light is the S3 mini’s Achilles’ heel, though its bright LED flash helps for close up snaps without bleaching out your subject.

The front-facing VGA camera is less successful than its rear-facing counterpart, but works fine for video calls – though you will need to be in decent light.

As for video performance, the S3 mini records 720p HD video at up to 30fps and once more, performs best in good light, though you are able to use the LED flash to help in low-light situations.

The camera app is extensive and packed with features. You can access it from the lock menu so you can be snapping within a few seconds.

With stills, you can choose from 12 scene modes for automatic setting tweaks, sepia, black-and-white or negative filters for an artistic finish and different shooting modes including continuous and panorama, plus more advanced features like smile shot – for automatically taking a photo when the camera recognises a smile.

Video features are a little more restricted, but you still have the ability to add effects, set a timer or even restrict the size of a video so it can be sent over MMS.

All in all, the camera performance is one the S3 mini can be proud of, though once more – there are competitors out there that are outclassing it at a lower price tag.

The Galaxy S3 mini does feature one thing its big brother doesn’t out of the box: Android Jelly Bean, the latest iteration of Google’s operating system. Granted, it is version 4.1 rather than the recently updated 4.2 found on the likes of the Google Nexus 4, but it’s recent enough that you shouldn’t feel left out.

Jelly Bean runs smoothly on the S3 mini, even with the smaller processor. This is helped by the fact that it runs at 60fps, making it stutter free and ultra-responsive.

Over the top of Jelly Bean, Samsung has placed its own TouchWiz user interface. If you’ve used any Samsung phone recently, this will be familiar to you, though it’s certainly been simplified from older iterations. Ultimately it’s an experience that doesn’t actually stray too far from that of vanilla Jelly Bean – a good thing, and something Samsung possibly learned from the likes of HTC.

On the lock screen you have customisable shortcuts to three applications – set to ChatOn, Samsung’s chat service, Google search and camera by default. Once you’ve passed the lock screen you’re taken to the centre of your seven homescreens – compared with the Nexus 4’s five – which you can fill with your choice of Samsung’s wide array of widgets and shortcuts.

The dock has also been expanded to allow up to five shortcuts at the bottom, which you can choose to change to what you like, including app folders.

Of course, it’s also packed with Samsung-only apps and features. This includes the Samsung App store, though the Google Play Store offers a better selection, S Suggest for app recommendations based on what you currently use and the Samsung Video Hub – though once again you’ll find a wider, and more recent selection on the Play Store.

Although it does the job for a quick music fix on the go, we found audio wasn’t delivered with as much clarity or detail as the Google Nexus 4.

Plus with on board storage cut to a paltry 8GB on the handset we tested, music fans will need to turn to the much-needed microSD card slot for expansion.

Unfortunately, all the things the S3 mini does well can’t hide the fact there are other phones at this price point and below that offer more.

The newer Google Nexus 4 is cheaper and beats the S3 mini in every way in a head-to-head. And a very quick look online shows you can pick up the full-blown and far better Galaxy S3 SIM free for not a lot more than the mini’s £290 asking price.

So while the mini is a very capable handset, it’s priced that little bit too highly for us to be able to recommend it. There’s better out there for less money, and that’s something that simply can’t be overlooked.