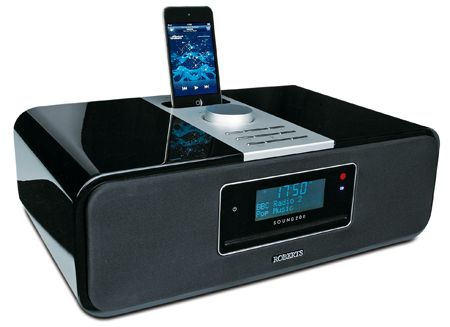 A versatile all-in-one worth seeking out a deal on

The Roberts Sound 200 is a classy piece of equipment.

Its curved, piano-gloss black case and bright blue display all look the part, and its features shelf is also well stocked thanks to DAB and FM tuners, a dock for iDevices, SD card slot, USB socket for external drives, CD player and alarm function.

You can also record content from CD and radio to SD cards or USB drives – a nice touch.

It’s easy enough to get to grips with, too, and is helped no end by its quirky remote control. This is a horizontally configured wand, held much like a games controller, and provides a welcome departure from the run-of-the-mill, wafer-thin plastic-fest devices such as this often come with.

Separation between instruments is fair, if not the most finessed, but things break down a little in the upper reaches of the frequency range.

Harmonically it’s restrained somewhat, and doesn’t dig up quite as much tonal variation as we’d hoped – a trait that’s displayed across all sources. The 200 closes in a little around the midrange and lets the bass run wild, which robs notes of some sonic bite.

The treble is harsh and edgy, too. There’s a variety of EQ presets to help with this, but they don’t really change the underlying sonic DNA…

Our favourite sound came via the iPod dock – it tightened up compared with the same WAVs played from a CD. Plus, with iDevices comes the bonus of doubling up as an internet radio source, accessed from an iPhone or wi-fi-enabled iPod Touch.

However, even with the 200’s features and ability to drive a larger room, it still scoops three stars. A unit with many skills, yes, but one that’s let down by its sound.