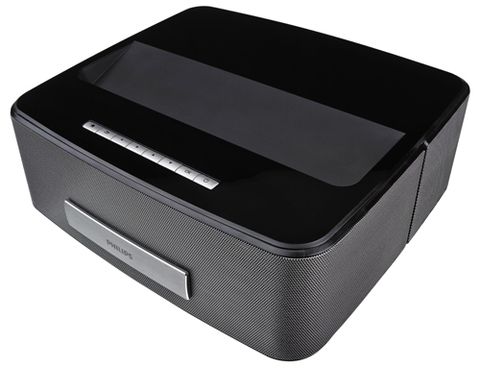 This one has much to offer, but the lack of Full HD at this price is a stumbling block

The Screeneo HDP1590TV is an unusual projector. It has network capabilities, an extremely short throw, it sounds surprisingly good and it even has a digital TV tuner.

We were impressed by its range of features a year ago, and since it’s had a price cut from £1500 to £1000 we felt it deserved a second look.

Position it 10cm away from the wall and you’ll get a 50in picture; move it to 44cm away and the image size grows to 100in. There aren’t any adjustments as far as levelling goes and the focus control is rather vague in action, but overall it’s fairly fuss free to get going.

Of course, using a dedicated screen will give the best results. But this Philips is happy projecting straight onto a wall. It even offers a certain amount of compensation for the wall colour through the well laid-out set-up menus.

Even with everything optimised, this projector’s appeal doesn’t rely on its picture making ability – a good thing too, as it’s decent at best. The Screeneo is an HD-ready design with a resolution of 1280 x 800. This means it has to upscale standard definition material and downscale Full HD.

All this processing takes a toll, as a comparison with Epson’s similarly priced EH-TW6100 shows. There’s a clear shortfall in terms of detail and naturalness. Black levels are deep, but lack insight, while the colours are overly rich and could be subtler.

But, let’s not be too harsh here. The Screeneo’s main purpose is to combine a large image with portability – something that traditional projectors like the Epson aren’t designed for.

Judged on its own terms this Philips delivers perfectly enjoyable images. Play the Blu-ray of Thor: The Dark World and you’re in for a fair bit of fun.

Colours may be over cooked, but the projector’s vivid approach is pretty likeable and never goes far enough to jar. We’re pleased with the punchy white levels and overall contrast is strong. The claimed contrast ratio is 100,000: 1.

Move to 3D in the form of Gravity and the Philips piles on the plus points. Its active 3D image is surprisingly stable – helped by the intelligent way this film implements the technology.

The projector’s ability to combine dark and bright elements in a single frame come to the fore with the deep space scenes where the multitude of stars stand out brightly from the black background. The Philips is impressive with 3D. It’s just a shame there’s only one pair of glasses supplied in the box.

Admittedly it doesn’t deliver the subtlety and sharpness you’d get from a Full HD rival such as the BenQ W1080ST+, but the rich colour balance, fine contrast and stable image remain. Skin tones are decently handled and, on the whole, the Philips remains an entertaining watch.

You can watch TV too. The Screeneo has a built-in standard-def digital tuner, and it does a pretty good job. Picture noise is kept at a relatively low level and the character of the image is consistent with the projector’s performance elsewhere. Fast moving objects are dealt with competently.

Usually, we find the built-in speakers in projectors poor. Not in this case. While no substitute for a dedicated sound system, this projector sounds surprisingly balanced.

It certainly performs way better than most TVs, even good ones. A rated total power of 26 watts doesn’t sound like much, but it’s enough to give the sonic presentation a fair amount of authority and scale.

It’s a full, relatively smooth balance with little of the harshness and thinness we normally come across. Delve into the relatively intuitive menus and you’ll find adjustments to expand the sound and alter the bass balance. It’s worth playing around with these as they helped the sound considerably in our largish test room.

At a push, the sound quality is just about good enough to use the projector as a (background) music system. It’s the first time we’ve ever written that about a projector.

You can connect either wired or wirelessly via Bluetooth or DLNA over a home network. The Screeneo feels clumsy, particularly when used to stream music from a NAS, but it’s a useful feature in certain circumstances.

Connectivity is good. There’s an ample supply of HDMIs and USBs – three of each – as well as a SD card slot, stereo analogue outputs and legacy video inputs, such as Composite and VGA.

We think the Screeneo is a clever product. Its portable nature and unfussy set-up have real appeal. Add that to the surprising level of sound quality and it becomes a tempting proposition.

Yet, we can’t quite overlook the picture quality. With a suitably high quality full HD picture, we think the HDP 1590TV would be a winner.