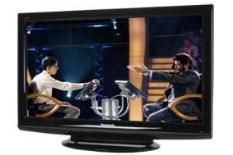 We've reason to be grateful to Panasonic for the TX-P42X10B. Spring is just around the corner, when TV manufacturers' fancy turns to unleashing a torrent of new products – so to get the first of Panasonic's 2009 Viera range a little ahead of the deluge can only be good news.

And the good news keeps on coming: if you accept the TX-P42X10B for what it is, it's a great-value plasma TV.

However, there's one significant hurdle to overcome before you add the Pana to your shortlist: its less-than fashionable 1024 x 768, HD-Ready resolution.

Naturally, the 'X10B's price reflects the relative poverty of its resolution, but some Blu-ray-owning consumers might be inclined to restrict their search to Full HD screens only. In this instance, that would be a mistake.

Sensible spec for the money
After all, in every other respect the Pana's got perfectly respectable specs. Three HDMI inputs should be plenty, and each of the less exciting inputs (component, RGB Scart, S-Video and composite) is represented too.

Twin tuners is only sensible, and an SD card-reader is a nice touch. The 'X10B's glossily finished, decently slim and the on-screen menus are the usual Panasonic exemplars of good sense.

Only the new remote control, visually familiar but feeling cheaper and nastier than before, strikes a false note.

We started with the digital and analogue TV tuners, and the Pana impresses from the off. It can't make David Dickinson look normal, obviously, but the people around him enjoy natural skin-tones.

Switching to DVD content, and our yet-to-be-bettered-for-testing-purposes copy of Training Day, and the 'X10B continues the good work.

Scaling the 576-resolution images to fit its panel confidently, the Pana restates all the admirable qualities of its TV picture and adds in greater stability and detail retrieval.

It's prone to the occasional tizzy when asked to track unpredictable or super-fast motion, but on the whole it's most enjoyable.

Downscaled Blu-ray looks good
Unsurprisingly, it looks its best with Blu-ray images, even if they are downscaled from 1080p. The truly risible RocknRolla shows off the 'X10B's ability with colours in general and blacks in particular – contrasts are especially impressive here, and movement is assured.

There's an inevitable shortage of detail when compared to similarly sized Full HD sets, and a corresponding hint of softness to edges – but then 42in Full HD plasmas don't often cost £700, do they?

Across all inputs and sources, sound is of the ho-hum variety – no weight to speak of, little in the way of dynamic heft and prone to sibilance at volume – but that, frankly, is par for the course at this sort of price.

And, frankly, it's not enough to put us off the Panasonic TX-P42X10B – it bodes very well for the rest of Panasonic's 2009 range.