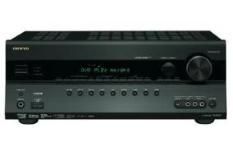 A real belter. One for fans of action flicks, not those who prefer a softly, softly approach

The '607 looks tidier and more refined than last year's models. There's a neater arrangement of buttons, and a wider display gives this brute a more inviting appearance.

If there was a Top Trumps game based on these AV receivers, the '607 would be the killer card. There are no fewer than six HDMI inputs (five on the rear and one on the front).

The Onkyo also includes upscaling (up to 1080i), and is one of only two models we've seen recently that's compatible with Dolby's fancy new surround-sound processing mode, Pro Logic IIz.

Front height speakers
Instead of using surround back speakers in a seven-channel setup, you can position 'front height' speakers above your front left and right speakers.

This new mode takes non-directional sound effects, such as rainfall, and feeds them through the 'front height' speakers to give a greater sense of spaciousness.

The amp sounds at its best with Pure Audio mode engaged – this turns off the display and any video circuitry that isn't being used.

As with some of the Onkyo's peers, we also found that dialogue in particular benefited from turning the amp's Audyssey EQ system off.

With it set to on, dialogue through the centre channel sounds a little unclear and lacks articulation. Turning it off brings the centre-channel action more to the fore and gives greater balance to the front three channels.

Muscular sound
As we've come to expect from Onkyo, the '607 serves up a muscular sound all round. During the echo game in House of Flying Daggers, it almost boils over with dramatic bass.

As Mei flings her scarf from drum to drum, each collision sounds earth-shattering. The surround field is open and detailed.

There's no questioning the explosive delivery, but we'd sacrifice a bit of this bravado for greater refinement and control.

Subtleties of soundtracks are sometimes lost among all that crashing and banging. And that's where the top all-rounders in this genre have the edge.