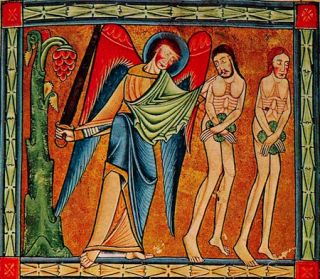 Serpent or servant? The biblical scholars may argue whether the partner in crime in the Garden of Eden was a snake or a mistranslation, but all seem agreed that the instrument of humanity's downfall was a singular fruit.

Take one bite when it is dangled before you, and be forever in thrall to the dark side: 'in sorrow shalt thou eat of it all the days of thy life', as the King James Bible has the voice from on high declaiming.

Of course, we were lucky: we didn't have to bear a permanent symbol of our failing, as befell Cain a generation later. Think how bad it would have if we'd all had to walk around carrying the mark of the cause of our fall, complete with that fateful bite taken out of it…

Trouble is, we have succumbed to the temptation, and now we're paying the price for it. Vengeance isn't quite being taken on us sevenfold yet – though give it a year or two – , but it seems much of the world is in thrall to an overarching power, seemingly able to do with us what it will.

It rings the bell, we line up for feeding time, slavering for the latest morsel.

How have we been tamed? Contrary to popular opinion, it's not a matter of freebies or advertising to persuade the press to spread the word: the tempter is more subtle than that, and we've done all this seemingly of our own free will.

Well, with a little subtle coercion by opinion-formers, not entirely discouraged by the great marketing machine.

Back in the early days, the likes of Douglas Adams seemed like lone voices railing against the mighty corporations, putting their desktop money where their convictions lay, and daring to be different.

Even better for the cause, they were evangelistic – purely because they sincerely believed in the path they were following. Artists, those in publishing and the like cottoned on, and it wasn't long before the word was taken up by those for whom just about the only interesting thing about their lives was that they'd thought - and bought – different.

The kind of kids who were always jealous of the first in their class to have the new toy or LP or video have grown up to be those standing in line, clutching their hard-earned cash or credit cards teetering on the limit, for their turn to be first.

They get applauded for their efforts, for the wisdom of their choice, for running into the temple to receive, and come out blinking into a new dawn, brandishing the tokens of their faith, and ready to spread the word (or sneer at non-believers).

Trouble is, with tens or hundreds of millions now taking the alternative route, it's not so alternative, not so different any more – and so the marketing machine has to change tack.

With great power comes great responsibility, but to an outside observer – one who's among the thousands never to receive the coveted and conditional invitation to spend my own money to attend one of the hallowed prayer-meetings, and a-whoop and a-holler with the great and the good – the approach seems to have long moved away from fighting the might of the evil corporations by providing 'funner' alternatives.

Now it's taken on the techniques of the street provider of addictive substances.

'You liked that last pill I sold you just a few weeks ago? Try this one: it's new and improved and will give you even more of a rush. Yes, I know it's even more expensive, but you know how things are…'

Shortly after, you're walking the same street, still on a buzz from the last purchase, and 'Hey, look what I have here: yes, I know I said the last one was the best, but this one's even better. It's the one everyone's talking about, the must-have. Once you've tried this one you'll just want to throw away all your old ones.

'Why not try this one? Does almost the same, but it's just different, so you'll want that one, too. Oh and this one's almost as good, but even smaller, so you can more easily hide it in your pocket. Go on, you know you want one - and get a move on: so many people will want it there won't be many around, so you'd better order now to make sure you're not left behind.'

You don't even have to go looking any more: once you're hooked, once you've bought into the belief-system, news of the latest thing on the street can be streamed straight into your home.

You just sit on the sofa and let the good news wash over you, those whoops and hollers surrounding you on your 7.1-channel system.

It's just like you were there, but all in the comfort of your own front room: truly tidings of great joy, delivered to all people.

You feel the rapture, you click, and lo – unto you is brought the latest miracle.

Trouble is, it's all getting too much, too relentless, and the cries of the faithful ever more overbearing.

Oh well, what's happening in the real world? Ah yes, of course: Skyfoaawuh, as Britain's leading female exponent of the pub-singing style has it in the title song.

Phew! No chance of being taken in by a multimillion dollar marketing machine there, then…

Written by Andrew Everard (on a MacBook Pro)