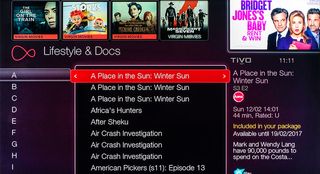 Earlier this week we reported Virgin Media customers would no longer be able to access UKTV channels - such as Dave, Gold and Yesterday - via their set-top box, owing to restrictions imposed on UKTV by the BBC.

As we explained, the BBC (who co-owns UKTV with Discovery) holds back some on-demand rights to its programming, selling them on to on-demand companies like Netflix and Amazon Prime Video.

The upshot? UKTV is no longer able to supply Virgin Media with the on-demand programming it requires.

As a result, Virgin Media has temporarily replaced those 23 channel slots and, with it so far failing to reach an agreement with UKTV, has sent a letter to broadcasters and media companies looking for permanent replacements, according to The Guardian. Those responses are due by Friday.

In the meantime, customers of the service have access to temporary channels such as Paramount Network (which broadcasts shows like Suits and Designated Survivor), YourTV and Love Nature.