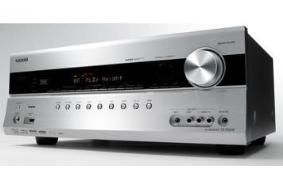 The Onkyo statement says that its home cinema products 'currently being rolled out and on sale after March 2010 will be compatible with the "Side-By-Side (Half)" and "Top-and-Bottom" 3D video formats.

'These formats have been added by HDMI Licensing, LLC as mandatory formats for 3D broadcast content in the specification for HDMI version 1.4a.'

This applies to the recently announced TX-SR308, TX-SR508 and TX-SR608 receivers, HT-S3305, HT-S5305, HT-S6305 and HTX-22HDX home cinema systems and, says Onkyo, 'subsequent home cinema receivers and Home Cinema in a Box products due to be introduced later this year'.

There's also a £200 Blu-ray player, and a 3D-ready 2.1-channel system with an add-on package available to boost it to 5.1-channel operation.

The star product is the £450 TX-SR608, the replacement for the best-selling TX-SR607. It has no fewer than five HDMI inputs, plus an extra one on the front, all HDMI 1.4-capable and able to pass 3D video.

The receiver also has Audio Return Channel, being able to take sound from a suitable TV, THX Select2 Plus certification and a suite of Audyssey technologies including 2EQ, Dynamic Volume and Dynamic EQ, plus DSX to allow the surround back channels to power either front height or front width speakers.

There's HDMI video upscaling to 1080p using Faroudja's DCDi processing, and of course full decoding for all the HD audio formats, and the receiver also has a PC compatible analogue RGB input, allowing PCs or netbooks to feed video through the receiver to the TV via the HDMI monitor output.

One step down is the £350 TX-SR508, which loses the front-panel HDMI input, 1080p passthrough, PC connectivity and Audyssey DSX. It has four HDMI inputs, 7x130W output and the same DACs and DSP chips as the TX-SR608, and like the more expensive receiver will go on sale in April.

For more pictures of the new Onkyos, and details of the company's Blu-ray player, systems and packages, see our picture blog.