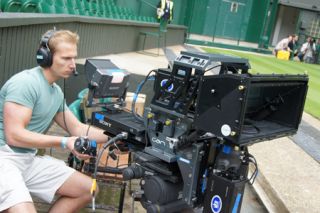 The BBC has this morning confirmed it will broadcast this year's Wimbledon finals in 3D on its BBC HD channel, as predicted.

The free-to-air broadcast in 3D will be available to anyone who has access to a 3D TV set and high-definition channels, regardless of which digital TV provider they use.

Live 3D coverage of the ladies' and men's finals on Saturday, July 2nd and Sunday, July 3rd will mark the 125th anniversary of the Wimbledon Championships.

The BBC's 3D coverage is being provided in partnership with AELTC, Sony Professional and Can Communicate.

The 3D broadcast will also be available to watch in a limited number of cinemas across the UK, and the Beeb is offering a small number of 3D screenings which will be free to the public via this link. Tickets will be allocated through a random draw.

Danielle Nagler, head of BBC HD and 3D says: "I'm delighted that in this anniversary year we're bringing UK audiences a new way of getting close to the action on Centre Court. I'm sure that 3D will only add to the drama as the world's greatest players compete for the championship."

The BBC is thinking about showing the Wimbledon tennis finals live in 3D.

The corporation says it is technically possible to broadcast the 3D coverage live on one of its HD channels.

As we reported earlier this year, the tournament is already set to be filmed in 3D and offered to broadcasters.

We're at Sony HQ hearing all about the company's latest 3D developments, where it has been revealed that the BBC is thinking about showing the 3D coverage itself.

Here's a selection of pictures showing the 3D camera rigs Sony has installed at Wimbledon to film this year's finals on Centre Court.

For more news on Sony's 3D plans, follow our twitter feed for live updates through the day.

The Wimbledon finals will be shown in 3D for the first time this year, following an agreement between the All England Lawn Tennis Club (AELTC) and Sony.

The event will be filmed in 3D by Can Communicate (CAN) and screened live in high-definition 3D to compatible cinemas around the world.

Sony will work with SuperVision Media, its theatrical distribution partner, to bring the "excitement of 3D tennis to 3D cinemas worldwide".

The AELTC/Sony/BBC production of the Men's Singles Semi-Finals and the Ladies' and Men's Single Finals will also be offered to rights holders and other interested global broadcasters.

Fujio Nishida, president of Sony Europe, says: "Watching tennis in high-definition 3D is a stunning experience: it's gets as close to the atmosphere and excitement of Centre Court as actually being there."

• In a separate development, Sony has bought Hawk-Eye, the UK company that specialises in providing tracking technology to sports events and broadcasters.