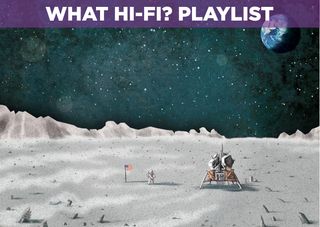 Retelling the story of the American/Soviet space race of 1957–1972 using hard-to-come-by access to the British Film Institute’s archive on the subject, Public Service Broadcasting’s The Race For Space is a collection of potent widescreen sonic paintings liberally studded with snatches of some of the most evocative broadcasts ever transmitted.

Fans of PSB’s 2013 debut Inform – Educate – Entertain will immediately be at home with this collection of propulsive, atmospheric and occasionally dancefloor-worthy pieces.

The PSB modus operandi continues to be a kind of well-supervised collision between Kraftwerk and The Orb (if neither had a phobia of guitars) – consequently The Race For Space is quite short on actual songs, but long and luxurious on evocative soundscapes.

From the wordless-choir-plus-JFK of the opening title track, through the genteel chillout-tent beats of Sputnik to the weightlessness of Valentina, The Race For Space is a more insistent and coherent proposition than ‘instrumentals-plus-scratchy-old-voice-recordings’ might at first seem.

And while it’s not the toughest challenge you could present to your set-up, without wide, deep and well-defined soundstaging The Race For Space could sound a bit of a mess. Timing is crucial too, plus an explicit midrange is required to fully appreciate all that history.