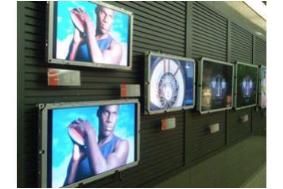 The two South Korean companies look set to increase further their share of the market over the next few years: Samsung signed a deal to build an LCD panel plant in China a couple of weeks ago, and now LG has inked an agreement for a similar enterprise.

And with the Chinese LCD TV market expected to grow by more than 50% in the next two or three years, overtaking North America and Western Europe, that means LG and Samsung are well-placed to enjoy a further sales boom.

According to figures from TV market analysts DisplaySearch, the two companies together accounted for 33.4% of worldwide LCD TV sales in the period from June to September this year, while leading Japanese companies Sony and Sharp together took 17.4%.

Samsung's market share was 21.1%, representing sales of 6.9m TVs in the three months.

Meanwhile LG, which has overtaken Sony to take second place in the worldwide LCD TV sales rankings, had a 12.3% market share, selling 4.01m sets – the first time the company has sold over 4m LCD TVs in a quarter.

Over the first nine months of the year, Samsung has sold an estimated 17.6m LCD TVs, more than the combined sales of Sony and Sharp.

And in the world of LCD display panels the figures are even more stark: total shipments of panels was 15.6m in September this year, up almost 50% on the same period in 2008, and of those sales Samsung had 24.3%, and LG Display 24%.

Building on those sales, LG Display announced yesterday it had signed a deal with the Chinese city of Guangzhou to build an LCD panel plant there. The company will own 70% of the plant, estimated to cost almost £2.5bn, with the rest owned by the city and a Chinese partner.

This follows Samsung's announcement two weeks back of a £1.3bn investment in a similar joint venture with the Chinese city of Suzhou.