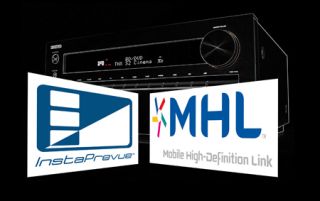 Onkyo has teamed up with Silicon Image to develop the world's first home cinema receivers with InstaPrevue and MHL technology.

By using InstaPrevue, you no longer need to cycle through the inputs on the home cinema receiver (HDMI 1, HDMI 2 etc) to switch between source components. Instead, you just click on the relevant picture.

MHL technology is a high-definition audio/video connectivity standard that enables a mobile device to transmit 1080p uncompressed video with up to eight channels of digital audio over a five-pin connection, while also supporting HDCP copyright protection.

MHL-enabled home cinema receivers provide power to the mobile device when connected via MHL, so your mobile or tablet will still be fully charged after watching, say, a full-length film.

"The 2012 Onkyo receivers add to the growing MHL ecosystem of DTVs, smartphones, tablets, and are the first to support InstaPrevue technology," says Alex Chevet, senior marketing director at Silicon Image.

Onkyo's 2012 range of home cinema receivers will be unveiled at CES in Las Vegas from January 10th.

We’ll be reporting live from the show, so there’ll be daily news coverage, videos, blogs, interviews and more here on whathifi.com throughout the week.

What Hi-Fi? Sound and Vision is one of the key European media partners for CES 2012.