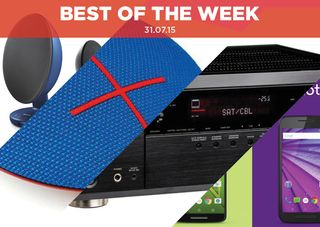 This week we attended the launch of Motorola's latest smartphones, KEF brought back its famous EGG speaker design, while we found out that BT's Ultra HD channel won't work with all 4K TVs and AV receivers.

MORE: The inside story of the Ministry of Sound sound system

KEF has brought back its famous 'egg' design for its new 2.0 desktop speaker.

The EGG Wireless Digital Music System offers a number of ways to connect audio devices, including aptX Bluetooth, a built-in USB and an optical input. The USB input supports high-res sample rates up to 24-bit/96kHz.

The launch of BT's Ultra HD channel is fast approaching (starting with the Community Shield match at Wembley this weekend) and a few more details are emerging about its compatibility.

It does mean that early adopters will fall on the wrong side of the divide, but 4K TVs from LG, Panasonic, Philips, Samsung and Sony are compatible.

Music streaming hits a record high in the UK

Listen to high-res audio on your iPhone with NePlayer app

Ultimate Ears has put in an impressive showing of late with its Boom and Megaboom speakers, and they can add the UE Roll to its roster of brilliant wireless speakers.

The design deviates from before, opting for a disc shape rather than a cylinder. That change doesn't seem to affect the sound, which manages to be much bigger than we expected from such a small speaker.

If you need a wireless speaker when you're out and about, the UE Roll delivers a terrific portable experience.

Sony is pushing hard to promote hi-res sound, and the NW-ZX2 is another example of how seriously it's taking the format.

It feels solid and reassuring, the leather backing adding to the impression of quality. That transfers over to the sound which exhibits a level of control and confidence that makes the Sony an enjoyable listen.

That sound could use a little bit more fun, though, and the video performance suffers from the 854 x 480 resolution. But if you're an audiophile with £900 to spare, this Sony warrants further attention.

We're seeing Dolby Atmos popping up on more and more AV receivers in the budget area, and Pioneer is the latest to have a go with its VSX-930.

The Atmos performance is satisfying, with the extra headspace Atmos affords allowing a smoother, more fluid dispersion of sound.

However in its standard surround sound configuration, rivals just pip it, with the Pioneer communicating a little less insight and expression in its delivery.

Still, this is a fantastic budget receiver and well worth trying if you're looking for a cheaper Atmos-enabled amp.