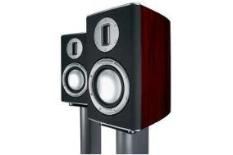 The PL100s are for those who place a sophisticated sonic delivery and insight above sheer entertainment. They're beautifully made, though.

Monitor Audio's Platinum range is nothing short of a landmark for the brand. Nothing the company has done in its three decades or so even hinted it was capable of building such exotic products. We're not talking about price level, either. MA has built expensive speakers before, but none have been as technically ambitious as the Platinums.

The Platinum's technical story is an interesting one. After years of using metal dome tweeters Monitor Audio has switched to a ribbon unit for its range toppers. This type of driver is rare enough, but more unusual still is that the ribbon driver was developed in-house rather than bought wholesale from an OEM supplier.

Good ribbons normally produce a crisp, fast and brilliantly detailed treble, but can introduce problems with integration: they don't usually go as low as dome tweeters and so force the mid/bass driver to reach higher than ideal. Monitor Audio's ribbon design gets round this problem and integrates seamlessly with the all-new 16.5 cm mid/bass driver.

The mid/bass driver - like the tweeter - makes use of the company's usual C-cam (ceramic coated aluminium/magnesium) for its diaphragm, but in this case uses this material to sandwich a Nomex honeycomb centre to create a very light, rigid and well-damped cone. The cabinet isn't just a simple wooden box, either. It's made of up of multiple thin wooden sheets shaped to form that complex curved profile, and the front baffle is made of a low-resonance composite material that gives the drivers a good foundation to work from.

Dedicated stands
It's pleasing Monitor Audio has gone to so much trouble to get the speaker stands right, too. So many manufacturers treat speaker supports as an after-thought, which is a shame as these have a massive impact on the final sound. MA's design costs £400 and is relatively light, well damped and looks very smart. They sound good, though it's a shame the spikes work loose with use.

Once bolted onto the dedicated stands - nothing as ordinary as Blu-tack or spikes here - the PL100s deliver a very fine sound for the money. Any decent speaker at this price level is going to be demanding about partnering systems and these Monitor Audios are no different. Consider two grand a piece for the partnering electronics and price compatible cables as a good starting point. So transparent are these monitors you could spend a lot more and they'll happily keep on delivering.

Take a good, long listen and it's clear these standmounters are so obviously a product of long and careful development. There are no rough edges here. The PL100s are finely honed to have an even tonal balance and a large dose of refinement. As these aren't particularly big speakers - 37 cm tall -it's no surprise bass levels aren't seismic, though low frequencies have sufficient weight and authority to keep most people happy.

Impressive composure
Listen to Ravel's Bolero and the PL100s make light work of the complex instrumentation and deliver stable and precise stereo imaging. Composure is impressive when the music gets difficult, as is the speaker's ability to play loud without distress. These qualities shine through with the commercial rap of Kanye West, too.

However, good as these speakers are, and at their price point they are good, we'd like a bit more bite to the sound. Timing could be crisper and dynamic punch, particularly at mid and low frequencies isn't as forceful as we'd like. It all adds up to a speaker that's great at informing the listener rather than enthralling them. That, at this or any other price level, is the difference between the good and the great.