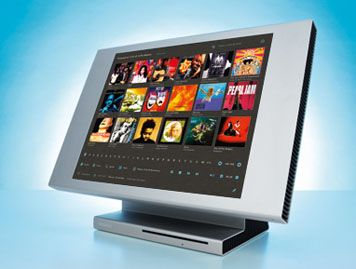 Other music servers can rival the Control 15's sound quality, but nothing, at any price, gets close to its extraordinary usability

The past decade has seen a major change in the way most of us consume music.

Increasingly, the ‘physical’ music collection, whether it's a cherished box of records or a carefully indexed rack of CDs, is an outmoded notion, a relic of a bygone, pre-internet age.

True, neither turntables nor CD players are quite dead yet, but overall, the evidence suggests that 21st-century music buyers prefer downloaded and streamed music, available from a huge range of providers.

Even if the compact disc does still figure somewhere within that mix, it’s chiefly as a file from which to create an appropriate audio rip.

Whether or not this process is cause for concern depends on your needs and perspective, but we’d argue that when done properly, digitally stored music needn’t spell doom for hi-fi enthusiasts.

A 500GB music server
That’s certainly true in the case of the Meridian Sooloos Control 15. A self-contained 500GB music server complete with its own 17in touchscreen display, it intertwines cutting-edge modernity – it will store around 1000 albums in lossless form – with a more traditional ‘sound first’ hi-fi sensibility.

This might be a product aimed at the digital music generation, but there’s no need for any audio apologies here.

Sooloos itself has its roots in the USA, its distinctive name derived from a sea near the Philippines.

Back in late 2008, Cambridgeshire-based Meridian bought the New York company, and has worked assiduously to refine its products ever since.

In Control 15 guise, the result is a rhythmically adept and effortlessly dynamic product that, true to Meridian form, is both supremely revealing of the subtlest details in a good recording and more forgiving of lower-quality source material than some rival devices.

Remarkably, it’s also considerably cheaper than it used to be. The very first Sooloos combination we tested, in its pre-Meridian days, cost more than £11,000; the Control 15 is £4750.

And it’s ready to go out of the box, too: while you can expand both its flexibility and its music storage capacity with extra components, there’s no requirement for you to do so.

You’ll need to own either a DAC or a DAC-equipped amp, as the Control 15’s standard-fit audio outputs are digital-only, but in context that’s no great hardship.

Meridian has fitted its upsampling technology to the Control 15’s output, giving it the ability to send audio at 88.2kHz into suitable devices, to the clear benefit of sound through our Bryston DAC – especially the ‘space’ around notes.

Simplicity is the key
If you prefer – and for the ultimate plug’n’play convenience – there’s another option: Meridian’s digitally equipped DSP speakers.

These can be connected directly to the Control 15’s SpeakerLink output (a proprietary Meridian interface based on ethernet) with no additional components required, giving you a very elegant high-performance hi-fi system.

Connections aside, there’s little to challenge the unwary in setting up the Control 15, and that’s a key part of its appeal.

The slot-loading CD drive in its fascia gives it the ability to rip your discs, which it’ll do using both FLAC (for best quality) and MP3 (for compatibility with portable players).

Show it an ethernet connection, and it will pull in all the metadata it needs to both populate its 17in screen with album covers, and create a library of artist- and performer-related data that, as you’ll discover the more you use it, will greatly enrich your pleasure in using it.

Handles a variety of formats
As you’d hope, the Control 15 can also stream music from online radio stations, and it can be used to import a variety of different music formats from your computer too, with support for files up to 24-bit/96kHz quality.

That's handy if, as is likely, you’ve already got a decent digital music collection in place. The only shame is that currently there’s no provision for online music streaming from Spotify, although US-based owners can subscribe to the similar (but sadly US-only) Rhapsody service if they wish.

That’s an irritation, because one of the great virtues of Spotify is that it makes it easier to discover new music, but in practice it turns out to be less of an issue than you’d imagine.

Once you spend time with the Meridian Sooloos, you'll find that it can pull off its own, almost equally impressive trick: it lets you rediscover the music you already own.

Flick through your collection
It achieves that by reinventing one of the great pleasures denied to most modern music enthusiasts: the simple, tactile enjoyment of flicking through your record collection.

Once loaded, indexed and presented on your Control 15, you’ll find your albums revive memories long lost in the mêlée of daily life, simply because, for the first time in (probably) years, you’ll be able to see all of them at a glance.

The company’s brilliant proprietary software lies at the heart of this interface: it lets you get to the song of your choice within 1/10th of a second, with album art and useful information refreshing just as quickly.

Searching made easy
Music browsing is made all the more enjoyable with the ‘Focus’ tool, which allows you to narrow your listening down to the songs that suits your mood at that moment, filtering by genre, artist, album, mood, recording quality and recording era.

Focusing on an artist can be an especially interesting exercise, revealing hitherto unknown tracks or collaborations, and if you want to take your musical exploration even further, you can instruct the Control 15 to 'Swim' (Sooloos-sea-style) through your music collection or, if you prefer, through a specific Focus.

In this mode it will automatically add genre-matching songs on to the end of your current playlist.

All this, taken together, is what makes the Control 15 so very special.

It's one of those rare products that even hardened reviewers warm to (and covet) instantly.

On this evidence, even if it is inevitable that the CD player will one day become an endangered species, hi-fi enthusiasts have no reason to fear the future.