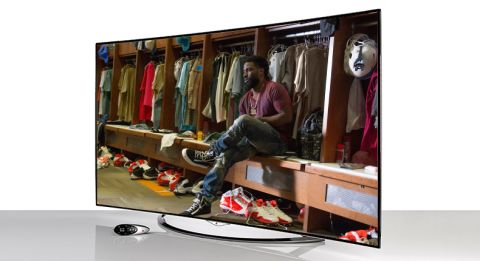 Another glorious advert for 4K, even if it isn’t the subtlest performer

You want an OLED TV? Then you have a choice of LG or Panasonic. LG has stood out somewhat in the OLED arena for the past five years, but the latest panel technology is now a tale of two brands.

But unless you’re willing to sell a kidney for Panasonic’s debut OLED – the £8000 TX-65CZ952B – or wait for a more affordable model to appear, then it’s probably one of LG’s ten or so models you’ll be after.

LG has updated some of its existing OLEDs – its two-strong EF9500 range and 55EG9200 model – with HDR (High Dynamic Range) support for streaming services like Amazon Instant Video that provide HDR content, but the 65EC970V has been sadly left out.

HDR isn’t even an official standard yet – the UHD Alliance is still working on it – but its omission here is worth bearing in mind for those adamant on future proofing.

The 65EC970V was one of the first confirmed 4K OLED screens that we saw, and it started life around £6000 – not so preposterous when you consider the Panasonic’s asking price, perhaps, but that’s not to say we aren’t ecstatic to find it’s been markedly reduced.

We start with the documentary Keith Richards: Under the Influence in Ultra HD on Netflix: a good sell for 4K and an even better one for OLED.

It’s not the first OLED we’ve seen, or even the second. But the depth of black that the OLED panel can display still has the ability to take our breath away. Needless to say, the 65EC970V ‘out-blacks’ any LCD we put up next to it.

Not only that; because the pixels in an OLED panel are self-lighting, when they turn off to produce black there’s no bleeding into another. So when a black piano key meets a white one, it’s remarkably precise and defined.

Both extremes of the contrast band are confidently handled, even if the purity and brightness of the whites aren’t quite as eyebrow-raising. It’s a strong hand to hold, although it’s one we feel LG has slightly overplayed.

While Richards’ leather jacket looks inky deep – even small black details on his hats and guitars are given the lights-out treatment – texture and clarity is a little jeopardised. Things can sometimes look unnaturally black.

Still, the 65EC970V’s shrewd, savvy picture means you don’t need a close-up of the veteran rock star to make out the subtle ribbed texture of his headband.

There’s insight into his rugged face and every scale in his snakeskin jacket is accounted for. You get your money’s worth in terms of crispness and sharpness, too. As for viewing angles, they’re good for a curved screen.

Start your 65EC970V journey with a Blu-ray and the LG does its best to trick you into thinking it was made for this 4K screen.

Jurassic World is awash with bright, rich colour, and the LG makes the park look like a pretty spectacular place. The greens are lush and the Mosasaurus’ pool sparkling. There’s shading in a dinosaur’s scaly skin too and the sea of Jungle greens are nicely varied.

Again, colour isn’t the most nuanced we’ve laid eyes on – that’s honour belongs to the Samsung UE65JS9500. Although not ‘out there’ enough to call gaudy, the LG’s palette has a stubborn vibrancy to it that shirks outright realism.

We knock the colour settings down a tad and reduce the impact of colour processing modes for a more faithful picture, but we’re never quite fully convinced.

Setting TruMotion mode to ‘smooth’ or ‘clear’ is a must to iron out some motion instabilities in fast-moving scenes. Ergo, Jessica Chastain glides across the control room in one swift smooth motion and people stay pin-like as the camera pans over the theme park.

Despite criticisms with colour subtlety peeping through high-definition broadcasts too, generally speaking the LG is a pretty talented upscaler.

We’d stick to HD where possible; in standard definition, the writing across the bottom of the screen during Channel 4’s Deal or No Deal is a bit blurry, and Noel Edmonds is softer than you’d want him to be. But that’s advice we find ourselves giving in regards to most large 4K screens. It’s a compromise.

The EC970V’s passive 3D performance is as bright and crisp as we’ve seen, and is comfortable to watch close-up. Contrast is well upheld, and that goes for motion stability too.

LG has partnered with Harman Kardon to improve the sound of its tellies, and the collaboration has produced good results. It’s bigger, clearer and more dynamic than the typical sound you get from TV speakers.

The ruggedness of Keith Richards’ throaty voice is intact, while the guitar work and instruments playing behind the interviews are clear and detailed.

It goes quite loud too, although there will surely be a time when you want more weight, bass and insight from a high-end soundbar (like the Dali Kubik One) or decent surround package (like the Monitor Audio Bronze B5 AV) partnered with something like Denon’s AVR-X2200W amp.

Its above-par sound quality is surprising considering the EC970V’s physique. It’s what LG calls ‘art slim’, and it’s a fair moniker. The screen is no more than half-a-finger width, classily finished with an almost zero-bezel that sits flat against the slightly curved screen.

A thicker back panel does a good job of keeping the screen sturdy (give it a slight push and there’s hardly any wobble), as does the metal, premium-looking stand. It’s the small (yet worthwhile) things like its ‘OLED’ badge that has us admiring its frame, and we like that it doesn’t impractically spread the TV’s length.

Not sure how the back of your TV looks? That’s probably because it’s never caught your eye; simply somewhere you plug in a few cables and never look twice.

You wouldn’t forget the LG’s reflective, smooth-to-the-touch rear, though. It just shows the effort that’s gone into making the 65EC970V look as good when it’s off as when it’s on.

It’s also where you’ll find three USBs and four 4K-supporting HDMIs, as well as a host of component inputs and a digital output for, say, handing over sound duties to a soundbar.

LG hopes you don’t keep missing Corrie or Made in Chelsea because ITV Player and All4 are missing from the LG’s smart offering at the moment. Instead, catch-up TV services BBC iPlayer and Demand 5, and video streaming services NOW TV, Netflix and Amazon Instant Video are under your nose. More apps are available to download from the LG Store too.

You don’t have to flick through each one to find your Friday night viewing, either. LG can do that for you. In the card launcher menu, ‘Today’ opens a panel of what’s available to watch that day from live and catch-up TV and streaming services.

‘Recommend’ plucks content in a similar fashion, basing its selections on your viewing habits. ‘My programmes’ is another handy shortcut, letting you pin your favourite channels to the launcher menu.

LG’s WebOS has quickly become the darling of TV software platforms with its smart, intuitive interface, and the EC970V packs the latest version (2.0). It feels natural to use and whether you’re changing inputs or tinkering with picture settings, nothing feels like a chore.

The highlight? Most operations happen over the top of what you’re watching so any interruption is minimal.

There isn’t a shortage of big-brand, big-screen TVs out there now, so which one to invest your hard-earned cash in isn’t a decision to take lightly.

There are bonuses of OLED – high contrast, wider viewing angles, thinner panels – but it doesn’t necessarily always offer the best on the market. That’s the case here.

The 65EC970V is an excellent telly, but there are subtler, shrewder performers that won’t clean out your purse as much.