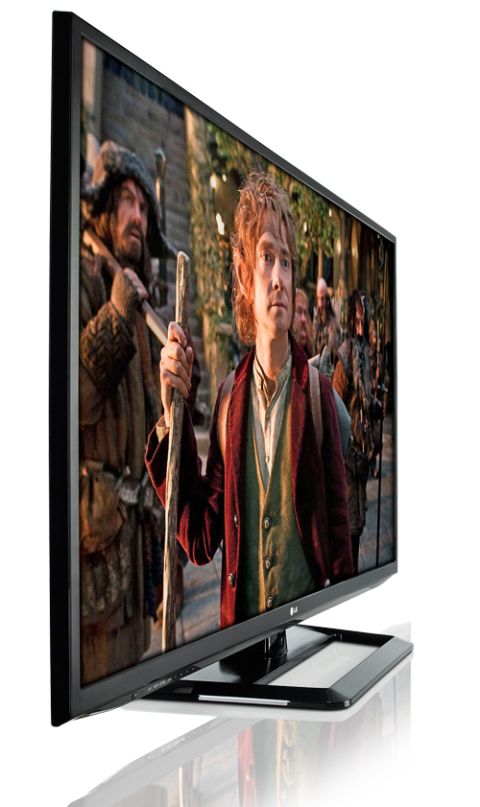 Huge, no-nonsense TV offers a good balance between picture and price – it's just lacking a little detail to light and dark areas

You don’t expect frills at this price – and more often than not, you don’t get them. Wide bezels and big square stands are par for the course, so it’s nice to see that trend bucked with the Full HD LG 50PA650T. Its ‘razor frame’ design looks sleek, while the sturdy angular stand is a smart touch.

As you might expect, it’s reasonably light on the spec front. You get three HDMI inputs (one on the back, two on the side), a side-mounted USB socket, SCART, component, RGB and composite inputs, and an optical audio output. And that’s your lot.

But still, it’s enough for most purposes – and besides, if you’re using a home cinema amplifier to drive external speakers, you’ll only need one of those HDMI inputs anyway.

It's pretty slim, but it's also heavy, at 26.4kg without the stand (and 28.8kg with it attached). So if you’re hefting it about, get a friend to help – and if you decide to mount it on the wall, make sure it’ll take the weight.

The menu system is easy to navigate, with plenty of picture-management options. We used a THX Optimizer Blu-ray to dial in some basic settings, then tweaked them to suit it all took a relatively painless 15 minutes or so.

Kicking things off with a bit of domestic voyeurism courtesy of Homes Under the Hammer in standard-def, we’re met with a reasonably clean, clear TV picture. Edge detail is decent, and while motion has room for improvement, it’s still watchable.

Flesh-tones are quite nice and natural, but there’s a stumbling block here in the form of somewhat wishy-washy blacks and off whites.

A quick look at a rolling news channel, with all manner of logos, text and split-screen action, showed the 650T up as a decent performer – with only mild jagginess to text edges and reasonably smooth motion in the scrolling parts.

Switching to the Freeview HD tuner, things clean up considerably. There’s a good amount of detail on offer. However, detail is mainly confined to the midtone areas, with darks and lights again appearing a little washed-out.

Flesh tones are convincing, but we’d like a little more subtlety between colour tones – people occasionally became a bit waxy-looking, with highlight areas edging towards yellowness, and there was some banding to gradients.

In fact, regardless of source we never managed to dial out that slightly yellowy quality to whites. It’s not the end of the world, and by no means a deal-breaker as you can see from our star rating, but it does mean that light areas aren’t as clean or detailed as they could be.

Next up is a DVD of Mission: Impossible – Ghost Protocol. We were quite impressed with the detail on offer here. There’s a decent amount of contrast between the black of Tom Cruise’s clothes and the blue/white of the Burj Khalifa building in the heart-stopping high-altitude scenes, too.

Again, there’s room for improvement here (there could be more subtlety in tonal gradients, for example), but it’s still better than the TV tuner.

Our last port of call is Blu-ray. The LG handles smooth text well, and the picture is clean, but it could do with a little more fine detail. There’s also a little less variation to skin-tones and general textures and, while whites are better again, they’re still not quite there.

So, this LG TV review is something of a mixed bag. It offers a good picture, with plenty of detail, an easy-to-use menu system and programme guide, nice design and decent performance with high-def sources. And you certainly can’t baulk at the price.

It’s a shame, because that slightly anaemic quality to whites and blacks it what holds this set back from being a real no-brainer purchase.