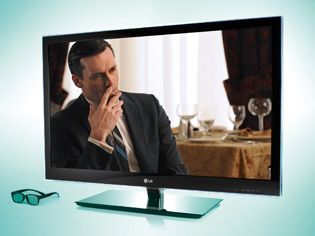 This passive 3D set boasts a killer combination of looks, price and performance

We've already tested the budget £475 LG 42PW450T, but this much pricier model has a superior spec with a Full HD 1920 x 1080 resolution, for starters, and passive-3D capability (a technology which LG insists is superior to the active-shutter system its 42PW450T utilises).

When we tested the 3D 47in 650T variant in our May 2011 issue, we found it to be hugely competent – if subject to dizzying price variations. Pricing on the 42LW650T seems a bit more stable.

It’s certainly an attractive enough showroom proposition, slim and, thanks to that narrow-ish bezel, vaguely stylish.

Seven pairs of 3D glasses in the box
Specification (including LED backlighting, Freeview HD reception, wi-fi via a dongle and online services like iPlayer, AceTrax, YouTube and what-have-you) is right on the money. And the LG scores heavily with its seven bundled pairs of 3D glasses.

As with the cheaper LG 42PW450T, the 650T’s logical on-screen menus and remote make set-up a doddle. Pictures from the Freeview HD tuner are nicely judged, with a neutral, undemonstrative colour palette complemented by great high-contrast work and convincing textures.

Motion-handling is of the ‘very good’ rather than ‘class-leading’ variety, and images could conceivably carry more fine detail, but the overall fidelity and nuance of pictures is pleasing.

Given a DVD of The Two Jakes to upscale, the 650T minimises picture noise, maximises the available detail and colours images as pleasingly as via its TV tuner.

Resolute motion tracking
There’s a hint of restlessness about edges in the most complicated scenes, and black tones can be depthless, but motion-tracking is resolute and white tones are bright and clean.

‘Bright and clean’ will do just as well to describe 2D Blu-ray pictures. Contrasts are stark, skin-tones and textures natural and black shades gain a fistful of information over their DVD-derived counterparts.

Edges are smooth and calm, and even the most complex patterns are described confidently.

Switch to some 3D content and the LG excels. First of all, it’s a much less solitary experience when you’ve six other pairs of glasses to share out, and the 650T is a bright, stable and eminently watchable 3D set.

Light, comfortable glasses
The glasses are light and, consequently, comfortable – and the 650 takes longer than any other TV in this test to provoke any watcher fatigue.

The 3D effect itself is immersive, though the relative lack of resolution (a passive system divides the full resolution between each eye, whereas an active system delivers all information to both eyes) can be betrayed in the most difficult scenes as a suggestion of shimmer and/or dot-crawl.

Add to this bravura performance a sound that by its sheer inoffensiveness is among the best in the test and it’s obvious the 42LW650T is every bit as compelling a proposition as its 47in colleague. This set has five stars written all over it.