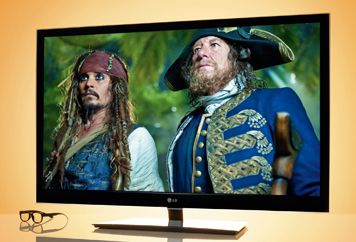 We’ll get a clearer picture (no pun intended) as more and more of 2011’s new TVs hit the stores and, most importantly, our testing rooms.

For now, it seems LG’s faith in ‘passive’ 3D technology (and its stance in opposition to a peer group wedded to the ‘active’ 3D alternative) is well founded.

This set is now on sale exclusively through Dixons and Currys for £1399.

First things first, though. The 47LW650T (most manufacturers offer 46in screens; LG likes to add an extra inch) is an inoffensive-going-on-bland-looking device, sturdily made and expertly finished.

Take care with motion processing
Set-up menus are a model of big-print clarity, and the remote control is relatively uncluttered.

The motion-processing options bear some thorough investigation, but otherwise the LW650T is simple to get the best from.

The LG does good work when upscaling DVD images too, keeping picture noise to a minimum and offering worthwhile detail even in the darkest scenes.

Blu-ray, of course, is the best of all 2D sources – and the LW650T makes the restricted colour palette and tricky contrasts of Tron look splendid.

Textures, edges and movement are all described with complete confidence, and detail levels are sky-high.

Only the need to ratchet volume skywards to get any meaningful sound from Blu-ray sources gives any concern.

The picture quality of the BBC’s iPlayer is decent – a match for any internet-enabled TV we’ve seen, in fact – and postings on YouTube blown up to fill the screen remain watchable.

No, the problem is entirely ergonomic: the LW650T doesn’t have the most legible or intuitive Smart TV menus, and using social networking platforms like Twitter is laborious.

If such features are important to you, we reckon LG’s optional ‘Magic Motion’ remote (a Nintendo Wii-style point-and-click device) is worth investigating

With one of the seven pairs of (light, comfortable and in a choice of colours) 3D glasses in place, watching 3D content on the LG is extremely impressive.

Stable, lush and vivid – while avoiding all signs of crosstalk or flicker – the LG is a richly satisfying watch in 3D.

It’s not absolutely stable with motion all the time – we’re yet to see a 3D TV that reaches those lofty heights – but we watched Avatar in 3D over many hours while doing this test, and we came away from the LG feeling less fatigued and eyesore than with some comparable sets

What else? Well, the sound is a tad bright – but it’s not too shrill.

Faces stiff competition
There’s a lot to like about the LG 47LW650T: it delivers a convincing case for passive 3D technology, you get all those 3D glasses as part of the package and we found it restful to watch without the fatiguing crosstalk of some active-shutter designs.

But, there are better sets out there for 2D picture performance, and the Smart TV functionality could be better.

However, if you want a simple, fuss-free way into 3D TV that offers great 3D performance – and without the expense of active-shutter glasses – the 47LW650T is definitely worth putting on your shortlist.

See all our TV Best Buys at whathifi.com