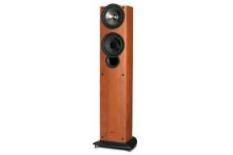 They're not without deficiencies to be overcome but, at this moment and at this price, the KEFs don't have too much competition

Our First Test of the KEF iQ50s yielded a three-star verdict and the fairly blunt observation that the speakers sounded a bit boring.

That assertion met with some pretty incredulous reactions on the whathifi.com forums, but our confidence in our findings was validated somewhat by KEF's reaction to the review.

Understandably confused by our verdict, the Kent specialist pulled apart the iQ50s we'd heard and found that, in the rush to get them to us in time for Awards judging, we'd been sent a 'first-run' pair that hadn't had crossover shortcomings rectified. Which explains a lot.

So here's a pair of iQ50s identical to those on sale at every KEF dealer.

The KEFs are available in five finishes, including 'dark apple', as seen here, and they are nicely finished, handsome loudspeakers.

Sonically, our new pair are not a million miles from the first iQ50s we were sent, but the differences in presentation are positive. "It's the same present, in much nicer wrapping paper," said one of our more romantic reviewers.

Added gusto in the mid-range
There's certainly extra vigour to these iQ50s, and as a result they're a more exciting listen. Their powers of midrange resolution are very impressive – Bob Dylan sounds as decrepit as he looks during Thunder on the Mountain.

They're still not the most rhythmically surefooted speakers we've ever heard, but the additional determination to low frequencies makes all but the most complex recordings more agreeable.

Though we're still not entirely convinced – a glance at our Buyer's Guide reveals a shortage of genuinely stellar floorstanders at the £500 price point, and this is another instance where we'd prefer a well-sorted standmounter on a decent pair of stands – perhaps the real point is that the iQ50s are as good a £500 floorstander as is available.