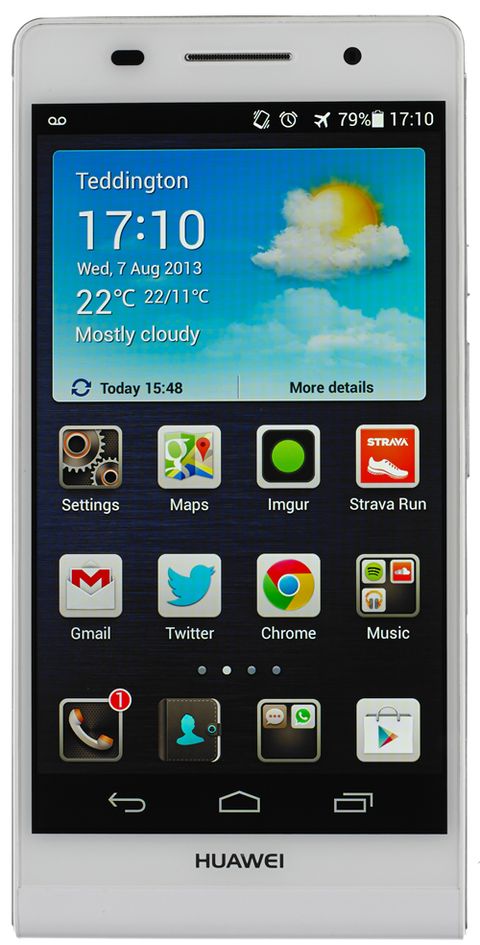 Nicely designed and simple to use, the P6 is let down by its sound and video performance

Huawei? Who they? Well, the Chinese multinational is the biggest telecommunications equipment company in the world with a revenue of over CNY 218 billion (£23 billion) last year.

The Huawei Ascend P6 is the company’s top-dog smartphone and its attempt to bring the brand to the UK and Europe. And, as you might imagine, it’s serious.

The good news is the Huawei P6 is a solid offering. It is undeniably well made and stylishly designed, sporting a decent if not earth-shattering specification and capable of good performance.

Ultimately, however, it shows that putting together a mobile to take on the very best smartphones is no easy task. The P6 can’t match the all-round performance, notably with music and movies, of our favourite phones on the market.

A 4.7in screen is let down a touch by a 720p resolution, but it’s the processor that proves more of an issue, slowing down navigation when pushed by multi-tasking or power-hungry apps and games.

While it’s nicely made, it’s hard to see why you’d pick this handset out of the ultra-competitive smartphone market.

Previously, Huawei has punted out plastic handsets at more modest prices. The Ascend P6 is a premium phone with a premium design to match – the “world’s slimmest smartphone”, no less.

There’s more than a nod to the iPhone, thanks to the silver trim, but all told it looks and feels like a satisfying, top-end smartphone.

Almost entirely metal, it has a brushed aluminium back panel and a curved bottom edge. It is something of a slippery customer – though the Google Nexus 4 probably still takes that title – but is otherwise as easy to use as any of the big-screened devices that proliferate the top of the market.

All the buttons are found on one side of the device, with the SIM tray, SD card slot, volume rocker and screen/power on/off. The headphone jack is on the bottom left, and plugged with a pin.

Pull out this pin and it doubles as the SIM card remover. It all seems clever… until you wonder where to put the pin. Ultimately, we suspect that it will live, forgotten, in a drawer somewhere, leaving you with a standard headphone connection.

A 4.7in LCD screen is a smidgeon bigger than that on the iPhone 5 (4.5in), the same size as the HTC One, but smaller than the Galaxy S4 (5in). This, arguably, is the sweetspot for combining usability and screen real estate.

At 120g it’s a similar weight to the big rivals, too. In fact, truth be told, it’s all quite similar. But hey, Huawei has clearly demonstrated with the P6 that the Chinese behemoth can make a desirable piece of kit (even if you opt for the pink model rather than black or white).

We never do phone benchmarks, or indeed measurements with hi-fi or home cinema kit, because they can be misleading and the proof is always in real world performance.

While the Huawei P6 has solid specification, the interface looks a little old-fashioned and, more pertinently, we found multitasking between apps or using processor-hungry apps did cause some slowdown.

The Huawei Emotion UI provides four screens to fill with apps and widgets as is the norm for Android (some phones offer five). The P6 runs the Android 4.2 Jelly Bean OS at the time of writing.

The icons sit in predictably neat rows and columns, and Huawei has left the navigation as it comes with the stock Android OS. So it’s simple to use if perhaps uninspiring to the enthusiast. There’s no app tray however, so any new apps are simply lobbed on to one of your home pages.

One thing you won’t be lacking with the P6 is apps and features. It pulls together many of its stock apps into two ready-made folders: Mgmt. and Tools. And we admit it pleased our geekier side: a Flashlight, Sound Recorder, DLNA app, many of which are genuinely useful compared with the average bloatware in our opinion.

The ‘Me Widget’ which Huawei loads on the home screen can pull in your choice of contacts, music, photos and other information – but we soon got rid of it, not least as we didn’t want to use the P6’s own music app.

The screen, while lower resolution than some, looks sharp enough for most apps and web browsing. We’re more concerned by the propensity for slow down when multi-tasking or gaming; it doesn’t seem to take much to elicit a slurring screen transition.

Despite the 4.7in screen, the Huawei P6 has a resolution of just 1280 x 720. That, in no more than a few months, has become below par in a world of Full HD phones. Does it show? Arguably it’s not resolution that’s the problem. Rather, issues with noise, general instability and motion let the side down a little.

The usual brightness adjustment is here, but Huawei has also added a colour temperature adjustment. A simple slider gives a fair amount of flexibility or there’s a default setting. Default is about right to our eyes, or perhaps a touch cooler.

We load-up some BBC iPlayer content and colours are nicely balanced. There’s decent detail, sharp edges, and skin tones and faces are presented naturally. We try some of our video content and it’s more of the same.

Our beef comes with the appearance of digital noise in background blocks of colour and some blurring with fast motion. More worrying is some infrequent picture flicker on the BBC iPlayer app. Side-by-side with the HTC One it would hold its own – but for these not insignificant negatives.

The most notable addition to the Huawei P6’s sound performance is Dolby Digital Plus. Promising a typically more encompassing, broader sound, it certainly does that. What’s more, it gives a decent and necessary boost to volume: we find the P6 on the quiet side with a variety of headphones, and find that we are whacking the volume up close to max.

Huawei’s Music app isn’t much cop, but you can of course stick to Google’s Play Music, and all the extra cloud and streaming features it offers, or use the likes of Napster, Rdio or Spotify.

However, even with a decent pair of headphones (the SoundMagic E10 will do for starters) the sonic performance is lacklustre. Vocals sound a little muffled, in fact the whole of Disclosure’s Latch sounds as if a blanket (albeit a thin one) has been placed over the top.

Bass depth or clarity isn’t quite there either. We just about prefer results with DD Plus turned on, but either way it’s no match for the best in class iPhone 5.

Huawei is bullish about the camera quality of the P6, as are many manufacturers these days. It offers both an 8MP rear camera and a 5MP front-facing lens.

This confidence in its snappers is not entirely misplaced: pictures are prone to being a touch over-saturated but otherwise the level of detail and overall sharpness is decent. The camera app is fast and responsive, too.

Elsewhere, a 2000 mAh battery is fairly par for the course and sure enough normal use finds the P6 lasting a pretty typical 24 hours or so of moderate use. Call quality proves pretty clear and effective, and online data is delivered via 3G only, with as yet no sign of 4G.

Huawei is clearly capable of designing and building a premium smartphone. But while the hardware side is sorted, the P6 shows the software still needs some work.

Much of our day-to-day use proved the P6 to be an effective easy to use phone, and all the necessary features and some handy stock apps mean it’s not found wanting on paper.

But there are glitches. The phone is prone to lag when the processor is pushed – scrolling text and fast motion can blur – and there are some issues with certain apps, notably iPlayer. Similarly, sound quality isn’t up to scratch.

It’s passable and unlikely to annoy, but it’s simply not as good as many of the best smartphones on the market when playing decent quality files. This is a very good effort (and it is a touch more affordable than some of the premium mobiles on the market) but it’s not quite the finished article.

Something tells us, though, that the Ascend P6 won’t be Huawei’s last effort.

MORE: All our Android smarpthone and tablet reviews