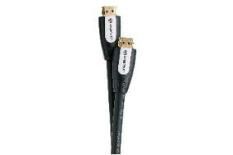 It's a step above the budget cables in price, but not so much in quality

HDMI cables are often one of the trickiest products we test. While differences can be fairly clear, more often than not it takes an extended period of comparative testing to discern differences.

And those differences are almost always more easily revealed with audio not video.

Harmonic Technology's HT1 is priced at £90 and thus needed to offer better results than existing favourites such as the van den Hul Flat.

In short, it didn't. The level of detail is comparable, but edges aren't as sharp and motion is less stable.

The HT1 also lacks some of the sonic punch and excitement served-up elsewhere. So three stars it is.