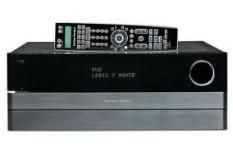 It’s good-looking, but the AVR 660 doesn’t pose a significant threat to its key rivals

Home cinema amps from Pioneer, Denon and Yamaha have all set exceedingly high standards at this level, so the Harman Kardon AVR 660 has a tough job on its hands.

The stylish, minimalist look makes a good first impression. The majority of buttons are behind a flap on the front; just a power button and volume dial are left exposed.

This is neat, but can prove awkward – and the volume control feels cheap. On-screen menus look sophisticated, but navigating them has to be done using an unintuitive learning remote control.

Network connectivity
The four HDMI inputs on the back of the amp are adequate, but we wouldn't say no to a couple more. 1080p upscaling is included, as is network connectivity and internet radio playback via the amp's ethernet socket.

iPod owners can use The Bridge II iPod dock and control all major functions through the remote.

The Gamer Blu-ray has explosions, gratuitous levels of gunfire and a sprinkling of dialogue. The AVR 660 makes an immediate impact, firing out the action in a bold manner; this amp hits you with a forceful, powerful sound.

Has a tendency to shout
Dialogue sounds weighty and meaningful, and high frequencies energetic, although the crack of each bullet reveals an edgy hardness.

This shouty character means, even during calmer moments, the AVR 660 can't communicate the shift in dynamics as well as class leaders.

It does a good job of steering effects between channels, but the top machines do it with greater flair and precision.

The AVR 660 has appealing attributes, but it also displays character flaws not present in the top amplifiers at this price.